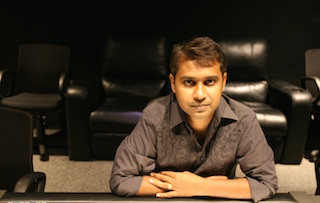 With more than 250 film titles to his credit, Nair has served as a senior re-recording mixer for Rajkamal Studios (FutureWorks) in Mumbai in addition to his role at Avid. While most of his work has been on Bollywood movies, he has also worked as a version mixer for Hollywood releases from Warner, Disney, Paramount, and other studios. Nair chose Halo Upmix after searching for an upmixing tool that could not only deliver surround output that sounds as close as possible to the original, but also allow him to work efficiently and save time.

"Advances in technology have given audio engineers more flexibility to deliver complex mixes. But the new efficiencies mean we're expected to deliver much more in less time — while still reaching for inspiration and new ideas," Nair said. "My colleagues and I first discovered Halo Upmix at IBC2015, and right away we could see that Halo is an extremely immersive tool. I knew I had found the upmixing tool I was looking for when I heard the reverbs, pads, and instruments open up in a Halo-upmixed song to deliver a cohesive-sounding track."

Prior to Nair's adopting Halo Upmix, his experience with upmixing tools and processes yielded mixed results, with the finished sound lacking in spatial information and openness. Although the Halo upmix controls are similar to those on other tools, Halo offers unique center channel management and spatial density controls. In addition, Halo provides an "Exact" function for creating a downmix that is almost identical to the original.

Nair added, "One of the most valuable features of Halo is its ability to upmix to Dolby 7.1, and now, 9.1 surround formats. This format flexibility, and the control Halo gives me over the finished sound, is absolutely essential in my work. Rather than simply performing a full program upmix, I'm able to do things differently; for instance, I might add harmonic distortion and reverbs to an element and then upmix it as a parallel signal that could be blended with the original signal, creating a much more cohesive and opened-up tonality and spacing for the instrument. Since Halo reacts differently based on the harmonic content for blending sounds, the movement in the surround space is very analog and has an element of apparent randomness that I love."

In addition to Halo Upmix, Nair is a satisfied user of several other Nugen Audio tools — including the Seq-S equalizer, which allows him to apply a spectral mixing method, and the Monofilter and Stereoizer plugins. In combination with Halo, Nair is able to use these tools to create a sonic placement that is unique in texture and sound.

"Sree is precisely the type of audio professional for whom we designed Halo Upmix. He has seen many profound technology changes throughout his career, and he's helped advance sound engineering in key ways. For instance, Sree was instrumental in setting up the world's first Dolby Premier Atmos mix facility while at FutureWorks studios in Mumbai," said Jon Schorah, creative director, Nugen Audio. "With Halo, Sree has discovered new ways to mix and create soundscapes that are simply not possible using other methods. Halo enables engineers to break away from typical mix patterns to create a uniquely textured and nuanced result — and audiences are the real winners."