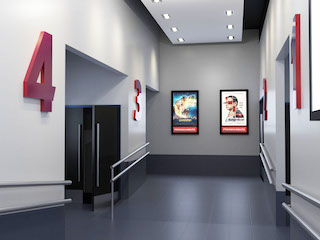 Muvix, Chile’s newest multiplex chain, has signed an agreement to equip 40 theatres throughout the country with Christie’s digital cinema projectors over the next three years. The Muvix brand is a new one belonging to the Syem Group, a family-run enterprise operating in the cinema exhibition sector in Chile under Cine Star, which has four multiplexes in Chile and is the country’s only chain owned by Chilean capital.

While Cine Star focuses on small multiplexes with no more than four screens in small cities and towns with populations of between 40,000 and 70,000 inhabitants, Muvix, will be located in the country’s major commercial centers, improving and renewing the industry’s current overall resources in the country.

Muvix’s mission is to be a major player in the cinema industry and to compete on an equal footing with the big multinationals operating in Chile. However, the new exhibitor also has its sights sets outside its home country, with plans to expand into other South American countries, starting with Peru.

Sebastián Martínez, Muvix’s CEO and founder said, “We were well conversant with Christie projectors because, as a family group, we have been operating in this industry for more than 60 years and we had already used its 35 millimetre projectors. We have excellent references for the brand, and the technical team we are putting together are coming from different exhibitors in the industry, many of them with prior experience working with Christie.”

Martínez continued, “For Cine Star and Muvix, choosing Christie as its projection partner was not a decision we took lightly. That’s because we are currently immersed in a process of expansion of both our chains, so it was really important to have a technological partner that we could rely on in the long term. Christie demonstrated a much greater interest and involvement in our expansion process than other projection brands. We know that its products are the leaders in terms of quality; and we visited its factory in Canada to take a look at its production processes and what it has in the pipeline, and that helped make up our minds to work with Christie.”

The first of Muvix’s multiplexes to be equipped with Christie cinema projectors will be located in the city of Punta Arenas in the south of Chile, which is scheduled to open its doors this coming December. It will have four screens and around 700 reclining seats, making it the biggest and most modern complex in the city. More specifically, this multiplex will be equipped with projector workhorses Christie CP2208, and CP2215 and the  CP2230.

Diego López, Christie general manager for NOLA and the Andes Region said, “We are delighted that Muvix has chosen us as its projection partner in this new venture it is undertaking. We know that the chain is committed to delivering the best standards in projection in order to stand out from its competitors, and we are convinced that with our products and service they will be able to give their audiences that added value”.

In 2018, Muvix will open new screens in Santiago and Linares and in 2019 in Talca, Antofagasta and Talagante, with an initial investment in the millions of dollars. Each one of these cinemas will be located in malls currently under construction or in the planning phase.