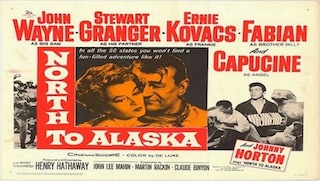 Directed by Henry Hathaway, North to Alaska was a critical and popular success upon its original release and remains a favorite among fans of The Duke. Wayne plays a Gold Rush miner who falls in love with his best friend’s fiancé while escorting her to the northern minefields. Stewart Granger, Ernie Kovacs, Fabian and Capucine costar. Variety called the film “good-humored, old-fashioned…slaphappy entertainment.”

North to Alaska was the first film to take advantage of MTI Film’s new high-resolution scanning system which features an Image Trends ScanMaster 4000 system equipped with an Oxberry film transporter.  Scanning was done at 4K and in non-realtime to maximize detail, and proprietary infrared technology was employed to automatically detect and eliminate dust and scratches. “We are able to detect surface dirt and scratches on both the cell and emulsion sides of the negative,” explains MTI Film CEO Larry Chernoff.

Further restoration was applied using MTI Film’s own Correct DRS technology, with work divided between the company’s facilities in Hollywood and China. A newly developed Color Breathing tool was employed to reverse degradation in the color channels.

Finally, the new master underwent complete DI color grading. MTI Film colorist Jeremy Sawyer applied the grade, working under the supervision of Fox’s Michael MacKinnon. “Because the negative was so faded, it was extremely difficult to recreate the film’s original look,” MacKinnon says. “Jeremy and I compared the raw scans to existing prints and from there worked to bring it back, as closely as possible, to its theatrical state. In compensating for the fading, we improved the film tremendously.”

MacKinnon believes that fans of the film will enjoy the results. “The state of the negative would have made it impossible to restore this film photo-chemically,” he observes. “MTI Film’s process allowed us to overcome all of the problems we encountered and produce a new master that will last a generation.”