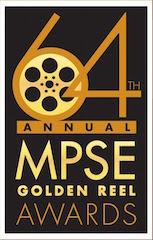 “Sound professionals are dedicated to enriching storytelling in motion pictures, television, documentaries, gaming and other mediums through the creative use of sound,” said MPSE president Tom McCarthy. “This past year, once again, has provided many outstanding examples of their imagination and craft. We congratulate all of this year’s nominees for their dedication and superlative work.”

The 64th MPSE Golden Reel Awards ceremony will be held on February 19th at the Westin Bonaventure Hotel in Los Angeles.

For a complete list of the nominees go to the Motion Picture Sound Editors website at http://mpse.org/