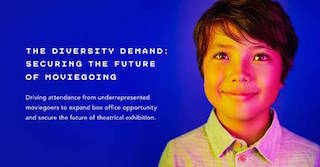 With both an increasingly diverse movie going audience and an increasingly diverse U.S. population, understanding how to attract diverse audiences will soon be paramount to the success of filmmakers and marketers, and to the sustainability of the exhibition sector. Movio’s recently released white paper, The Diversity Demand: Securing the Future of Movie Going, examines how theatrical audience composition correlates to increased representation on screen, and if this suggests an opportunity to drive box office by producing content representative of audiences that have historically been underrepresented in film.

The analysis confirms a correlation between a minority group’s representation on screen and that group’s audience turnout, with some groups attending in numbers at more than twice the usual rate. The research also shows that increased representation of minority groups on screen can influence less engaged moviegoers within that demographic cohort to attend the theater.

As a cursory analysis, Movio selected several pairs of theatrically released films, which would generally be considered similar in terms of both genre and budget. For each pair, one film featured an underrepresented lead or co-lead and the other film did not. The audience composition of each title was then analyzed by Movio’s data science team.

Horror hit Us brought out an audience that was nearly 100 percent more Black than the audience that attended similar title, A Quiet Place. However, the diverse cast also drew large numbers of non-Black moviegoers and was widely successful at the box office making 8x its production budget.

Crazy Rich Asians also brought in a significantly higher share of First Time, Infrequent, and Occasional Asian moviegoers than any other ethnic cohort.

Comparing DC superhero hits Wonder Woman and Aquaman, the analysis shows the female led superhero title did not significantly alter the demographic profile of the audience in attendance, as both titles attracted an audience that was 40-41 percent female.

Considering Hollywood’s longstanding hesitation to release a female-led superhero movie, the absence of underperformance within a certain audience group (male moviegoers, in this case) may be as meaningful as a title’s over performance with another.

Mega blockbuster hit Black Panther attracted an audience that was 38 percent more Black than Avengers: Infinity War. This is huge in absolute terms, with 40.7 percent of all Black U.S. moviegoers attending Black Panther.

“Movio’s ability to tie ticket purchases to individual moviegoers enables us to decipher the drivers of collective moviegoing behavior and to analyze attendance trends within demographic groups,” says chief commercial officer and president of Movio Media Craig Jones, who will discuss the white paper findings during his appearance at the upcoming New York Film Conference. “Today’s consumer has countless entertainment options, making it easier than ever for diverse audiences to find content that speaks to their tastes and experiences. If cinema is to remain relevant and continue having a cultural impact, it must attract these audiences by delivering more representative content.”

Discover all the insights and download the full white paper at http://www.movio.co/nyfc