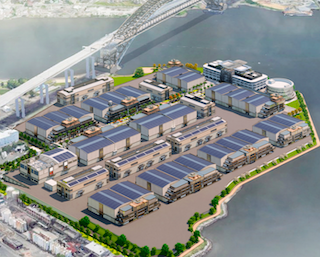 The Bayonne, New Jersey Planning Board has approved a major motion picture studio at the southern tip of the city. The movie studio, 1888, named after the year the motion picture camera was invented by Thomas Edison, will give a facelift to a long-vacant site. The studio will be constructed by 1888 Studios on nearly 75 acres of land at the former site of the Texaco oil refinery site.

The studio site, which is located on the Hudson River across from New York City, will consist of 20 buildings including a mix of 10 studio sound stages, five mill buildings where stages will be constructed and stored, attached office uses that will support the studio buildings, and a post-production office building, and a creative office building. 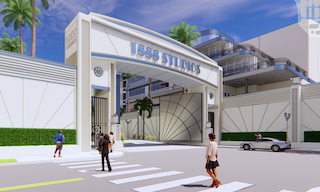 A lighting and grip building, a central utility plant, utility yard, a trash and recycling area, and a facilities yard will be constructed to support the studio use along with surface and four sub-surface parking structures.

The sound stages will be one-story buildings; the attached offices will be four stories. The architecture will be Art Deco, in a nod to the movie industry’s past. Bayonne was home to Centaur Film Company, the first independent movie studio in the country, founded in 1907. Centaur’s West Coast division was Nestor Motion Picture Company, which became the first motion picture company in Hollywood in 1911.

In terms of regular employees of the studio, a spokesman for 1888 said that there will be at any time approximately 2,100 people employed at the site as well as apprenticeships for Bayonne School District students. 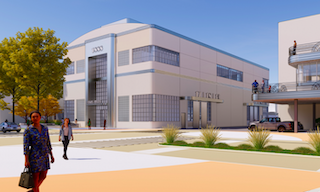 The developer is also planning a three-four-mile-long waterfront walkway around the perimeter of the site.

The site will be increased in elevation by roughly 18 feet. This aims to address potential flooding now and in the future.

The project is expected to be completed in about two and a half to four years.

In total, 2,127 parking spaces will support these employees spread throughout underground parking structures, which aim to prevent cluttering of surface parking lots on the site. There will be 107 electric vehicle parking spaces, with 21 on the surface and 86 in the garages.

The site will be pedestrian-friendly, walkable like a college campus. The set-up of the buildings is an extension of the grid of the existing streets of Bayonne, seeking to blend in with surroundings. The only thing that may stick out is the iconic water tower, which is synonymous with any major motion picture studio.