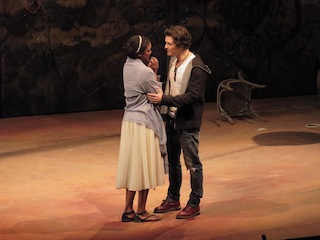 Filmed live at the Richard Rogers Theatre on Broadway in November, it features Bloom (Pirates of the Caribbean, The Lord of the Rings) as Romeo and two-time Tony Award nominee Condola Rashad as Juliet. Critics and New York audiences alike have welcomed the new energy and contemporary feel the production brings to the timeless story of the world’s most famous star-crossed lovers.

Christine Costello, managing director, More2Screen said, "Screening theatre productions at the cinema has become hugely popular and we’re thrilled to bring this modern take on one of Shakespeare’s best-known plays to our exhibition partners across the globe. With its star-studded cast and dynamic staging, this Broadway Romeo and Juliet will appeal both to the regular theatre-goer and to those coming new to Shakespeare, particularly teenagers and students.”

Stewart Lane, producer and co-founder of Broadway HD said, “This was the first time Romeo and Juliet had been staged on Broadway for 36 years and it’s a stunningly modern production directed by five-time Tony nominee David Leveaux. Broadway is an art that we believe everyone should experience and with our new company BroadwayHD we are committed to making that possible. We’re looking forward to working with More2Screen to bring our Broadway interpretation of the all-time greatest love story to local cinemas around the world.”