More2Screen to Distribute The Car Man 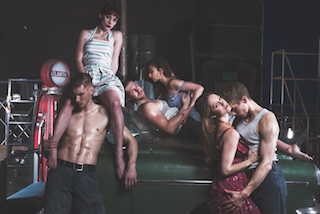 The Car Man is loosely based on Bizet’s popular opera Carmen and has one of the most thrilling and instantly recognizable scores in classical music, brilliantly arranged by Terry Davies. The familiar 19th Century Spanish cigarette factory becomes a greasy garage-diner in 1960’s America where the dreams and passions of a small-town are shattered by the arrival of a handsome stranger. Fuelled by heat and desire, the inhabitants are driven into an unstoppable spiral of greed, lust, betrayal and revenge. Lez Brotherston’s epic design, Chris Davey’s evocative lighting and Matthew Bourne’s vivid storytelling take in a wealth of cinematic references, creating a powerful and uncompromising vision of small-town America.

Christine Costello, managing director, More2Screen said, "We are delighted to bring this fantastic new Matthew Bourne production to our cinema partners worldwide. Following distribution of Matthew Bourne’s Swan Lake 3D to a global audience in 2012, including emerging markets like South Korea, and the award-winning Sleeping Beauty in 2014, we know our exhibitors will be eager to screen this latest offering from the Matthew Bourne stable.”

John Wyver, executive producer, Illuminations said, “With their expertise in distributing dance content to cinemas around the globe, including the two previous Matthew Bourne productions, More2Screen is ideally placed to take The Car Man out to an international cinema audience, reaching Matthew Bourne’s many fans both in the UK and across the world.”