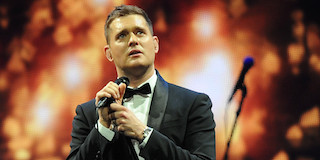 More2Screen will distribute Warner Bros. Records new music event, Michael Bublé – Tour Stop 148, to be released in cinemas worldwide September 25. The event includes a special fifteen-minute introduction by Michael Bublé exclusive to cinemas. The agreement does not include the United States.

The film Michael Bublé – Tour Stop 148 presents a front row seat to the superstar’s phenomenally successful sold out To Be Loved Tour, which concluded in 2015 and was seen globally by over two million fans. The multi-Grammy winning multi-platinum global entertainer is stunningly filmed for the big screen with superb 5.1 surround sound.

Michael Bublé – Tour Stop 148 showcases live performances of many of the Canadian superstar’s biggest hits including Home, Haven’t Met You Yet, Cry Me A River and Feelin’ Good.  His performance also includes the artist’s formidable charm and unique interaction with his audience. In addition, the film is intercut with exclusive behind-the-scenes footage of Team Bublé and how their Herculean efforts bring this moveable feast from arena to arena.

Directed by Brett Sullivan, Michael Bublé – Tour Stop 148, transcends the one man on a stage concert style by including a continuous narrative showing the dedicated team of production people, technicians, roadies, glam squad, wardrobe, security, management, truckers, riggers, the entire “it takes a village” family who literally keep the Bublé show on the road. Coping with the considerable logistical burden of moving this lavish production from city to city, these unsung heroes of Team Bublé demonstrate their invaluable contribution to the nightly show that is presented to the joyous audience of devoted Bublé fans.

Christine Costello, managing director, More2Screen said, "We’re delighted to be working with Warner Bros. Records to bring what will be the event cinema release of the autumn, Michael Bublé – Tour Stop 148, to our cinema partners around the world. Michael Bublé is a major star and has a vast following of passionate fans, all of whom will be able to relish this big screen event at their local cinema.”

Dion Singer, executive producer, Warner Bros. Records said, “Michael Bublé – Tour Stop 148 breaks the mould of the music documentary format, telling the story of the team behind the star while also capturing everything that makes Michael Bublé one of the most powerful performers on stage today.”