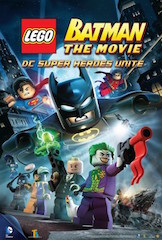 Dolby Laboratories has announced 13 new titles, adding to the growing slate of movies to be shown at more than 75 Dolby Cinema locations around the globe, including Warner Bros. Pictures and Lego Systems The Lego Batman Movie.

“Dolby Cinema adds to the fun and excitement of The Lego Batman Movie, with amazing color and spectacular moving audio,” said the film’s director Chris McKay. “We are thrilled to be the first motion picture to be released in Dolby Cinema, where the entire feature goes beyond the standard color range, using the full capabilities of Dolby Vision wide color gamut grading and playback, to deliver colors never seen before on standard screens. The brilliant colors combined with the stellar Dolby Atmos soundtrack will immerse audiences into the world of Lego as never before.”

“The captivating imagery and mesmerizing sound that only Dolby Cinema can offer is prominently showcased in this diverse slate of titles,” said Doug Darrow, senior vice president, cinema business group, Dolby Laboratories. “With every major studio delivering a Dolby Vision and Dolby Atmos mastered title to Dolby Cinema in 2017, we appreciate distribution’s tremendous support and desire to bring a best-in-class experience to audiences around the world.”

Dolby Cinema begins with the filmmakers’ vision—using the full storytelling capabilities that Dolby offers in image and sound production to transform the way movies are made and presented. With state-of-the-art image, sound, and acoustic capabilities, the movie comes alive to deliver cinema in its purest form.

These new titles join a slate of already announced features coming to Dolby Cinema in 2017:

Disney, Beauty and the Beast, March 17

Universal Pictures, The Fate of the Furious, April 14

Disney, Marvel’s Guardians of the Galaxy, Vol. 2, May 5

Disney, Pirates of the Caribbean: Dead Men Tell No Tales, May 26

Twentieth Century Fox, War for the Planet of the Apes, July 14

To date, 77 Dolby Cinema titles have been released or announced.