Modus FX Works its Magic on Now You See Me 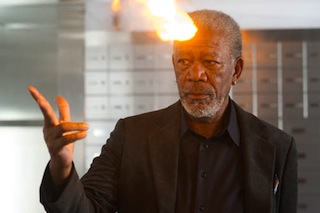 Modus FX completed many of the key visual effects shots on Now You See Me. Featuring an ensemble cast, including Jesse Eisenberg, Mark Ruffalo, Morgan Freeman, Woody Harrelson and rising star Isla Fisher, Now You See Me charts the progress of a team of illusionists who appear to rob banks during their performances, distributing the spoils to their audiences, all the while staying a step ahead of the FBI and Interpol. Modus was charged with many of the film’s CG sequences, creating compelling illusions that support the story and drive the narrative forward.

Modus delivered 227 VFX shots for the film, including a long camera movement sequence that culminates with a huge stack of money catching fire and vanishing entirely. The effects include a fight sequence in which a magician uses flash paper and playing cards as projectile weapons, before sliding down a CG garbage chute to escape. There is a spectacular CG “mirror box” magic trick, in which a sledgehammer is thrown in slow motion, shattering a huge pane of glass.

“Now You See Me includes several layers of illusion,” said Yanick Wilisky, vice president and co-founder of Modus FX. “The storyline plays with time while our effects shots play with visual reality. Together this makes for a great story that keeps the audience guessing. We had a lot of fun working with director Louis Leterrier and VFX supervisor Nick Brooks on this project.”

One of the most complex shots of the movie involves the disappearance of a stack of money in a sealed stainless steel vault. The digital camera shot starts with a macro close-up of an origami rabbit catching fire, orbits around the stack of burning money as it disappears, leaving not a trace of smoke or ash, before pulling back to show a playing card and the entire vault, now completely empty. The shot required a lot of compositing to give it a photoreal look. 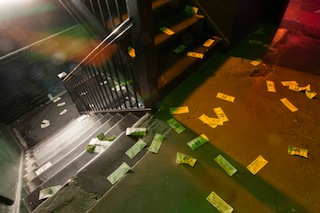 “This was the most challenging shot for us,” said Wayne Brinton, VFX supervisor on the project. “We had to decide how to make all the money vanish so it would be believable.”

Initially, the effect was conceived as a conflagration of magician’s flash paper, ignited by a series of wires and fuses.

“In previs the illusion was conceived as needing a digital timer,” Brinton said. “This created the problem of what to do with the timer and wires. We brainstormed and came up with an ingenious way of igniting the money involving potassium and water. The magicians could place some potassium above a pool of water so it would light the money on fire when they mixed.”

Modus suggested using an origami rabbit holding potassium and placed in a puddle of water so the fire would start when the water seeped into the paper rabbit. Leterrier loved the idea of having a rabbit in the scene. In the end the potassium-water mixture was cut as too complicated to explain in the story, but the director insisted that the origami rabbit remain.

“You get to know the director over the course of a shoot, and learn what they like and don’t like,” Brinton said. “Keeping the rabbit was great and it’s part of a visually neat effect.”

The final 500-frame shot involved simulation, camera animation, modeling and lighting and all of the elements had to be refined iteratively, until everything worked flawlessly.

The film culminates in an impromptu congregation of thousands of people from all over downtown New York at the 5Pointz building in Queens, all with the hope of collecting free money. 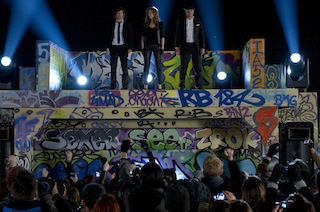 “This is an exciting scene and has the spontaneous feel of The Beatles’ rooftop concert in Let It Be, with people coming out of their offices to watch from the streets,” commented Brinton. “The difference with the 5Pointz scene was that nobody was actually there. We had to create the whole wild get-together – crowd, traffic jam and helicopters – in CG.”

After the empty building and surrounding streets were filmed from the air, Modus removed all of the production footprint from these plates, including lights, film crew and cranes. Modus populated the roof, courtyard, streets and sidewalks with the digital partygoers using Massive Crowd Simulation software. They used their in-house motion capture studio to create animation cycles for the crowd. Streets were lined with cars to create traffic jams, four CG helicopters circle the sky around the party and CG lighting enhances the festive atmosphere.

The mirror box is a classic magician’s trick that is used to hide objects and Now You See Me uses it on a grand scale. The thieves create a room-sized mirror box, with a 40-foot by 28-foot mirror that can be lowered at an angle to reflect the ground below, thus hiding the entire room behind it that houses the vault containing millions of dollars. Then, when one of the thieves throws a sledgehammer at the wall, it shatters the mirror into billions of pieces, revealing the vault behind it.

“Large parts of this shot are CG, including the thrown sledge hammer,” said Brinton. “We created a digital environment and made it fit with the surrounding practical set. 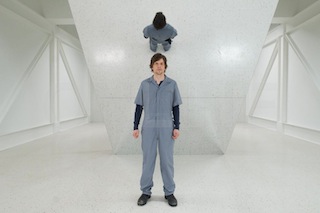 The actor threw the hammer from a distance so the mirror wouldn’t shatter on top of him. Modus started its work at this point, removing the shattered glass and structure on the ground from the shot. Then, they added dust and the reflection from the ground. The result is a stunning sequence in which slow motion both reveals the remarkable computer-generated detail and contributes to the dramatic tension in the scene.

An extended fight scene between FBI agent Rhodes (Ruffalo) and sleight-of-hand specialist Jack (Dave Franco) has the magician using his tricks to escape. He throws burning Euros and playing cards at Rhodes before miraculously escaping eighty feet down a garbage chute.

“This entire scene relied heavily on CG effects,” explained Brinton. “The look is more about style than practicality. The director wanted balls of fire coming at the FBI agent and the camera. We replaced the fire poker that Rhodes is swinging and the playing cards that Jack flings with virtual ones. This was all done in 2D in compositing and hand-animated inside Nuke.”

The garbage chute was a short, three-sided prop on the set. Modus extracted the actors and what was close to them from the plates, then extended the chute to make it look much longer. The prop was replaced with a digital chute that shows the actors sliding from the eighth floor to the ground.

Modus also created a car chase through the streets of New York, with cars flipping end over end in a sequence filmed entirely using green screens.

“With a movie like this one, in which illusions are at the center of the story, what we did was make the effects look like magic,” said Brinton. “We were able to break free and push the boundaries of the visible. I loved it.”

Directed by Louis Leterrier, Now You See Me is a Summit Entertainment picture and stars Morgan Freeman, Mark Ruffalo and Jesse Eisenberg. Modus FX completed 227 shots for the movie. The film was released on May 31.