Mixing Lenses for The Marksman 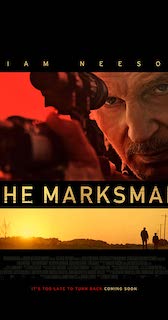 Robert Lorenz’s movie The Marksman debuted at number one upon release in the U.S. and owes much of its look to cinematographer Mark Patten. “The nature of the shoot is that the story starts in the big vista landscape of New Mexico and then turns into a road movie,” said Patten.

He said he chose Cooke lenses to maximize the majesty of scenic locations as The Marksman does with New Mexico during the opening sequences. But where it differs from many is that Patten used not one but two different sets of Cooke lenses on the movie, and he chose them from very different eras.

"I’ve always used Cooke when I can, all the way from the original Speed Panchros to the newer glass,” he said. “For this film, I really wanted to capture the expanse and vistas of New Mexico. We were shooting digital and I wanted it to have a warmer feel, so I shot the New Mexico sequences on anamorphic Xtal Xpress, hubbed out of Panavision in Albuquerque.”

The Cooke Xtals (pronounced crystals) are vintage front-element anamorphic lenses. Originally spherical lenses made by Cooke in the 1930s, they were rehoused and modified with anamorphic elements by Joe Dunton in the 1980s and are much prized for their unique visual character.

“Focus issues meant the Xtal Expresses would prove problematic in that section,” said Piaten, “but we were going to need something that could match those lenses for the rest of the film. We tested some original Speed Panchros, but we could not get a matching set. However, Panavision had just bought a couple of sets of the new Cooke Panchro/i Classics, which Cooke Optics produced to match the original Speed Panchros that matched perfectly.”

Mixing both spherical and anamorphic formats was something that the producers weren’t particularly enthused about, he continued, but they were on board once testing was complete and the optical advantages were presented.

“The start of this particular story lent itself to the classic glass,” he said, “so it was a case of‘how do I visually facilitate the nuts and bolts of the job once we get on the road. That cocktail of glass really worked.”

The Marksman was shot on Alexa Minis, and Patten said the low-profile nature of the new lens set was a distinct advantage when the cameras were positioned on the cars. Careful attention was also paid to creating LUTs that would work for both sets of lenses.

He added: “You have super vintage glass, which is more forgiving on the wide panoramas, and once you start getting into the grunt work of what we were doing on a daily basis, the LUTs that we had applied smoothed out any aberrations.”

All in all, he estimates that 60 percent of the movie was shot on the new Panchro/i lenses. And watching footage from the movie it is truly difficult to tell the difference between them and the old Xtals.

“The glass isn’t vintage, but Cooke has done a good job in terms of the drop off at the edges; they’re pretty close to what the classic lenses were,” said Patten. “Cooke lenses provide a way of telling the story that has breadth, roundness, and warmth; it’s something you can really taste. There’s a depth to their image rather than being simply clean, clinical, and efficient. Their images have a story.”

The Marksman is in theatres now and has spent three straight weeks as the highest-grossing movie in North America.