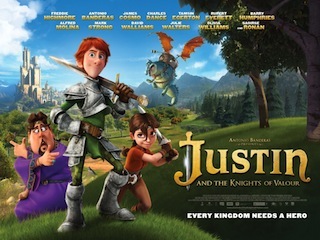 Justin and the Knights of Valour tells the story of a young boy who becomes a man as he embarks on a quest to become a knight. Directed and written by Kandor Graphics' chief creative officer, Manuel Sicilia, the animated adventure fantasy film boasts a famous cast of European voices including Freddie Highmore, Charles Dance, Rupert Everett, Barry Humphries, David Walliams, Julie Walters and Saoirse Ronan.  Antonio Banderas, who is a Kandor Graphics partner, is also the voice of character Sir Clorex, as well as producer of the film along with Marcelino Almansa, Kerry Fulton and Ralph Kamp.

In his new role as a producer, Banderas is respected for supporting a new generation of Spanish film directors, having already produced four successful films and plays a prominent role in Kandor Graphics' ongoing success. For this film, the company invested in SGO's technology to support its growing production demands, and chose a Mistika system to color grade and finish what is its very first 3D CG children's feature.

Juan Molina, director of Kandor Graphics said, “The fact that we have a Mistika system at our facility that can handle its own color correction and stereo 3D, conforming, finishing, DCP creation and even compositing, has made us choose Mistika to be at the centre of all our projects. Mistika is the backbone of Kandor Graphics' pipeline where we conform daily, regardless of the production status of each shot. Furthermore, SGO's immediate after sales support and the access we are given to the development team, are factors we truly appreciate.”

“The technical resources during this stage have been very versatile. Having one single Mistika system in the company allowed us to complete the color grading, stereoscopic 3D corrections, DCP creation and even the compositing, enabling to us to achieve a totally uniform film with great potential," said Javier Fernández, director of photography and colorist at Kandor Graphics. Javier adds "As a studio, Mistika's capabilities have allowed us to reach unprecedented independence levels, opening a whole new world of creative possibilities." 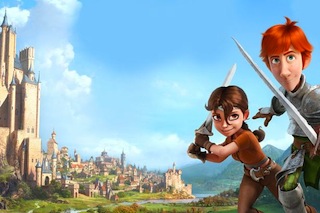 Javier added, "Also, I felt so fortunate to have Mistika for Justin and the Knights of Valour. With dual-roles as [director of photography] and colorist, I had complete control of the process, which made my job so much easier. The all in one system philosophy of Mistika resulted in us using its unrivalled toolsets and capabilities for many more tasks than we initially intended to from the start. We also utilized Mistika as a display tool as well as for checks, including DCP outputs as well as a compositing tool. The learning curve has been so fast that I was able to proceed from the first week of production. Furthermore, it’s been a pleasure to work with the SGO team throughout the production and post production phases and they were always available to meet our needs."

With the color-grading phase of the project, Kandor Graphics used Mistika to carry out color, brightness and contrast corrections of the shots so that the appearance of each sequence corresponded to its dramatic intention.

With his colorist hat on, Javier Fernández, said, "The fact that we were able to grade in-house using Mistika, allowed us to maintain tight control over the final look of the movie and it enabled us to make creative decisions on the fly during the whole process, without having to wait right until the end which was highly efficient for us.  At the same time, we also used Mistika’s immense powerful stereo 3D toolset to fine-tune the results to the maximum level. With Justin and the Knights of Valour being CG, we had already considered stereo 3D from the start within our pipeline at Kandor Graphics and owing to Mistika's remarkable flexibility and speed, we were able to change convergences and camera distances after the film was finished until we were 100 percent comfortable with the final results which was a real advantage.  Mistika has also been at the core for conforming and mastering, which for an international release is a very complex task where we again benefited from Mistika's capabilities."

Justin and the Knights of Valour was conceived as a stereoscopic 3D film at the outset as it was not an option to adapt it to 3D later on. The team felt strongly that the storytelling should take advantage of the stereo 3D qualities in order to support the story and not the other way around. 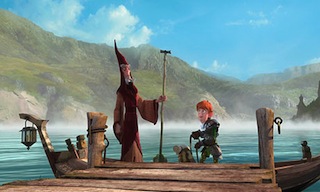 Kandor Graphics' pre-visualization co-director Jaime Visedo said, "Although there is a specific department which was in charge of this, our cameras used stereoscopic controls which allowed us to get an initial idea of how our work would look. 3D shouldn’t be the focus in itself. It’s easy to fall into the trap of being sensationalist and just throwing objects at the spectator. We didn’t want to do that. If an object was to be thrown at the viewer, it had to be justified in both worlds: 2D and 3D. To this end, we analyzed each shot in order to establish the points of interest and enhanced them within the global scene and the whole film. We looked for new transition systems between shots and adapted different controls to achieve maximum comfort at all times."

Antonio Montes added, "This allowed us to enrich the visual treatment and the spectacular nature of sequences such as the scene featuring the flight of Gustav, the crocodile."

“The most complex setting we had to manage at the pre-visualization department was without a doubt the mountain of the Abbey. We had to manage all the locations in one setting. The great lake, the mountains, the enormous rock and the buildings...all were unified and at scale! Developing such a setting in order to film was without a doubt a tough process for the art department and for its subsequent technical optimization. But this allowed us to film with flexibility and speed from all angles and possibilities”, said Joaquín Catalá, pre-visualization co-director.

“Given the story’s complexity, number of characters and the different locations where it occurs, pre-visualization became a key process in defining the film-making.” 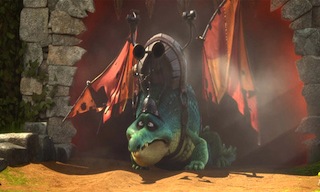 A revision of the right and left cameras also took place for the first time in order to check the stereoscopic 3D. The animatics were then approved by the director following a review with everyone involved, that the team calls the point of no return (check points), then the production department registered the 43 final breakdown of sequences, shots and assets.  With the final scenes, props, characters and cameras the layout process commenced. The scenes were optimized to speed-up the animation process and they prepared the shots where the action took place, ready to start the animation phase. With the animated sequence they carried out a second no return revision with the supervisors of subsequent departments. When the animation was concluded, the cloth and hair departments added dynamics and effects, which brought authenticity to the characters’ acting. At this point, the cameras had to be checked once again in case the animated shot needed re-framing, for example.

The matte painting process took place with 2D backgrounds, which can be seen particularly in outdoor shots in the film, and it went through to compositing in Mistika. The 44 backgrounds are digital paintings based on the color script of the sequence. The final matte painting is usually done at the same time as lighting and compositing processes. The FX department handled the digital effects such as fog, smoke, fire, dust, fluids and simulations where objects such as stone, glass, doors and wood break. Different layers for compositing were also generated with the effects work. The layers, which were generated in the lighting and FX departments were then integrated into the shot. The color continuity of each sequence was revised with all the frames of the film finally completed and the film’s look was finalized using Mistika at every stage. This compositing phase using Mistika takes place at the end of the pipeline. 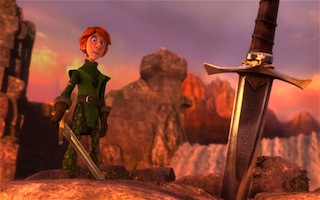 Molina said, "Thanks to Mistika’s power and versatility, we were able to work independently in order to post produce this feature film. This is exactly what we needed in order to succeed in a high level project such as Justin and the Knights of Valour, especially due to the complexity of simultaneous and international versions required in so many territories. In addition, Mistika's stunning color grading and Stereo 3D toolsets made it possible for us to meet the tight deadlines that a production like this demands without jeopardizing the creative process in any way."

"I was impressed with how the Spanish Mistika technology which we have embraced at Kandor Graphics enhanced Justin and the Knights of Valour in stereo 3D. It is great to see passionate companies like SGO contribute to innovation in our industry in such a significant way," said Manuel Sicilia, company partner and chief creative officer of Kandor Graphics and director and writer of Justin and the Knights of Valour.

“SGO is proud to be associated with Kandor Graphics and we are delighted that they have invested in Mistika technology to support many more features to come. Kandor Graphics is achieving tremendous success and has been able to position itself well due to their quality story-telling ability, combined with artistic and technical expertise and flair, which is quickly making it one of Europe’s world-class leading animation production companies,” said Jose Luis Acha, regional sales manager at SGO in Madrid.

To view the trailer and international release dates, visit the official site at http://www.justinandtheknightsofvalour.com/video