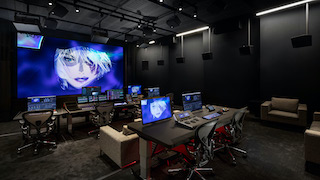 Audio challenges have inhibited wider acceptance of larger direct view displays because, unlike with acoustically transmissive projection screens, loudspeakers cannot be located directly behind the visual image. Placing screen channel loudspeakers around the display perimeter compromises uniformity of coverage, stability of image localization, and overall audio fidelity. To address this situation, Meyer Sound has introduced Ultra Reflex, a patent-pending solution for optimum reproduction of discrete screen channel audio on large-scale direct view video displays. For the initial launch period, Ultra Reflex solution is paired with Sony’s Crystal LED. The first joint installation for the two technologies is at a reference-level screening room and lab on the Netflix campus in Los Angeles.

Designed to replicate both critical viewing and audio mixing as well as accommodate VIP screenings, the room features a 17-feet wide by 9-feet high HDR-capable 4K Crystal LED from Sony. Proprietary DSP for optimization is supplied by a Galaxy 816 Network Platform.

According to Meyer Sound, the innovative Ultra Reflex solution preserves the audio advantages of a behind-screen system while also improving breadth of coverage for a wider sweet spot in the viewing space.

“The introduction of direct view displays in the cinema industry created the need for a unique solution for LCR screen channels,” says Miles Rogers, Meyer Sound business development manager, cinema & content creation markets. “Ultra Reflex is the culmination of prediction software, loudspeaker technologies, and the lifelong vision of John Meyer to create solutions for the most demanding audio professionals.” 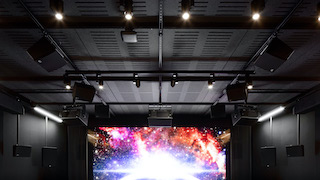 “With accurate color reproduction and outstanding contrast inspired by our industry leading master monitors, Sony’s Crystal LED offers a premium visual experience that has proven itself through its evaluation and reception by the post-production and creative communities,” says Theresa Alesso, pro division President, Sony Electronics. “We sought to complement this powerful imagery with an audio solution that not only matched the visual integrity but enhanced the overall immersiveness. Meyer Sound Ultra Reflex and Crystal LED provide the perfect marriage of superior sound and vision for creatives.”

Sony’s modular and scalable Crystal LED displays incorporate MicroLED with the company’s unique LED control and signal processing technology, offering a contrast ratio of more than 1,000,000:1, high brightness, a wide viewing angle and wide color gamut. The displays are installed and in use by leading companies and professionals across the world.

The innovative screen channels are part of a complete Dolby Atmos system that has quickly recallable snapshots for theatrical or 9.1.6 home entertainment playback modes. The balance of the system comprises a total of 37 self-powered Meyer Sound cinema loudspeakers, including HMS Series lateral and overhead surround loudspeakers bolstered by USW-210P subwoofers for surround bass management and X-400C cinema subwoofers with very low frequency control elements for bass management and LFE. 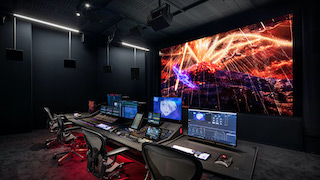 “I recently had a chance to visit Netflix to demo Sony’s new large-scale Crystal LED screen and the accompanying immersive sound system that Meyer Sound had developed for I,” says Will Files, re-recording mixer & sound supervisor for Stranger Things and Sol Levante. “To be honest I was a bit skeptical, having heard other various attempts at this type of thing. Instead, what I heard was simply stunning — a reference quality, completely transparent sound system that matches the spectacular visuals from the Crystal LED display. Playing clips from my mix of Stranger Things, I was truly shocked at how close it sounded to the studio where we had mixed it. I wouldn’t hesitate to mix on this system in the first place, it’s that good.”

“Earlier this year, I was invited to a demonstration of the new audio/video technology at the Netflix campus,” says Jon Taylor, re-recording mixer for Enola Holmes and Dumplin’. “I was led to a dark stage and sat at the console, then I was shown a clip from The Revenant. Having mixed this film only a few years ago, I was very aware of how the spatial dynamics should be represented, and I was absolutely blown away by the quality of sound and picture.”

The installation was implemented by a team of Meyer Sound engineers in consultation with Ron Lagerlof of Visioneering, Ryan Hufford of RH Design LLC and Studio 440 Architecture. At Netflix, director of creative technologies Jimmy Fusil was project lead, along with production sound technology specialist Ozzie Sutherland and manager Scott Kramer.

Upon launch, the Ultra Reflex solution is paired with Sony’s Crystal LED to provide superior audio and imagery, however the technology is compatible with all hard-surface direct view displays. Meyer Sound Ultra Reflex is fully scalable and suitable for all direct view applications, from home cinema and post-production studios through corporate installations and commercial cinemas.