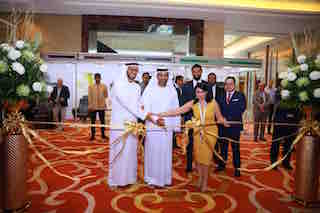 Executives from cinema chains, major studios, film distributors and their global partners attended the red-carpet affair. The awards were quantified by ComScore and presented in partnership with Dubai Studio City.

The People’s Choice Awards for the best film, best director and best screenplay were all won by Capernaum and received by distributor Empire Movies and the film’s co-writer Jihad Hojeily.

The MENA Cinema Awards was the concluding ceremony to the MENA Cinema Forum, the region’s only cinema convention. The three-day event welcomed more than 1000 cinema executives from around the world including global and regional studios such as Warner Bros, 20th Century Fox, Myrkotte Animation Studios and their regional film distributors. All the major and independent cinemas from across the region were present. On day one, the conference focused on major upcoming projects and CEOs of major cinema chains announced their multi-million pipelines and called for further partnership amongst all stakeholders. The second day of the conference was dedicated to technology and customer management, while the third day was focused on content and featured panel discussions about ways to increase regional production, quality of work and international distribution. Panelists included executives from studios, government, universities and distribution companies.

Organizers said the MENA Cinema Forum would return in 2020 with even a bigger show.