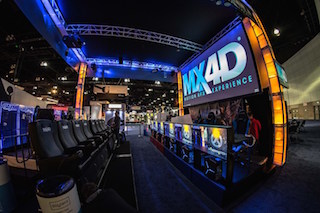 MediaMation has launched its MX4D Esports Theatre concept for exhibition. Cinema owners are continually seeking new entertainment to engage patrons. With that in mind, MediaMation is planning to offer a scalable entertainment package that converts a new or existing MX4D theatre into an Esports gaming environment that can then be converted back to the MX4D theatre configuration.

The company unveiled the concept at the recent E3 2017 convention in Los Angeles.

Hollywood Esports will also handle all the Esports activities, marketing, and promotional management of Esport activities within MediaMation's network of global MX4D theatres.

MediaMation is expected to open its flagship MX4D Esports Theatre at the TCL Chinese Theatre in Hollywood, California later this year. MediaMation plans to extend their eSport concept utilizing its theatre base of over 200 locations in 2018 (eventually creating a network of MX4D eSport Theatres around the world).

"I am thrilled that the MX4D Esports Theatre concept was received so enthusiastically at E3 this year," said CEO, MediaMation Dan Jamele. "Over the course of the show, we received tremendous feedback from gamers and spectators saying that they are looking forward to bringing our Esports theatre concept to cinema chains close to home."