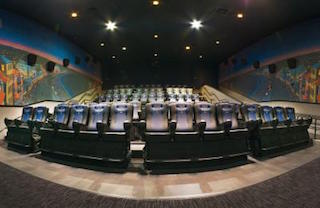 MediaMation has been commissioned to produce a 132-seat MX4D Motion EFX Theatre for Reel Cinemas in The Dubai Mall, the world’s largest and most-visited retail and entertainment destination.  The Reel Cinemas project is scheduled for installation this month. Middle Eastern systems integrator Scrabble is handling the installation.

The Dubai Mall, with more than 1,200 retail outlets, welcomed over 80 million visitors in 2014, underlining its credentials as the world’s most-visited lifestyle and entertainment destination. The 22-screen Reel Cinemas megaplex in The Dubai Mall is among the best performing theatres on the globe.

MX4D is MediaMation’s branded 4D pneumatically driven motion EFX system. In general, 4D refers to an emerging immersive cinema technology which allows movie-goers to experience Hollywood blockbusters, as well as locally produced major films, in a new way via the addition of moving seats, air/water blasts, leg/neck ticklers, fog, seat/back pokers, seat rumblers and other special effects that emanate from specially designed theatre seats, or from inside the theatre itself. These multiple special effects are programmed to both sync with and enhance the action on the screen and sounds in the theatre for a more exciting and realistic movie-going experience.

Heather Blair, MMI head of cinema sales said,  “We at MediaMation, are pleased by how enthusiastically the U.A.E. has embraced our MX4D theatres. This region frequently seeks out the best entertainment options for its citizens and visitors, and the fact that Reel Cinemas in The Dubai Mall has chosen MMI’s 4D system is a welcome endorsement of its significant value in the cinema exhibition marketplace.”

Scrabble’s COO Pruthu Sha, said, “It has taken over a year and a half to secure this project. We are taking great care as we install one of the first MX4D® cinemas in the UAE. Reel Cinemas is a very important client to us as we handle all their digital cinema installations. We couldn’t be more excited. The cinemas in the UAE territory are favorable to adding 4D screens and technology. We decided to align ourselves with MediaMation as we liked their air pneumatic technology and their business model. Our cinema clients are keen to have a local company like Scrabble assist with installation, maintenance and trouble-shooting. We are happy to offer that service to MediaMation and are their dealer in the UAE.”