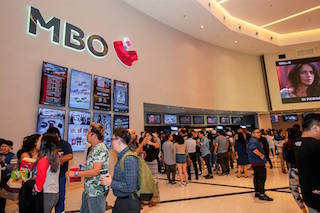 Since deploying Producer, MBO’s content and monitoring operations have been handled by a single staff member at head office. Successfully streamlining operations and automating sites’ day-to-day tasks has afforded staff time to add value in other customer-facing areas.

From one central point at head office, MBO can monitor and manage all content, key delivery messages, reporting, and pre-show advertising and trailers.

Mariam El Bacha, director of operations at MBO Cinemas, said of the deployment: “Producer has revolutionised our operations. It allows us to control our cinema circuit in the way we want much more easily, and the improved visibility means we can resolve issues quickly and maintain our high customer service standards. Taking full advantage of Producer’s automations means building our playlists is faster, more flexible, and more accurate.”

Producer is designed to control and monitor the status of all the sites in a circuit, displaying playback details in real-time and highlighting any upcoming issues for proactive resolution. Content can be managed remotely and pre-show packs of ads and trailers built from head office – saving staff time at sites and reducing the possibility of human error. MBO Cinemas has been using AAM’s TMS, Screenwriter, to manage content, playlists and scheduling on all 200 of their screens for four years. Upgrading to Producer extends and centralizes that functionality, providing MBO with improved control and visibility across their circuit’s operations.

John Aalbers, CEO at Arts Alliance Media said, “MBO are one of our most forward-thinking customers. We are delighted that they have embraced the concept of full automation and centralized operations. This is clearly an emerging trend in cinema focused on enabling superior accuracy and quality as well as more aggressive cost control.”