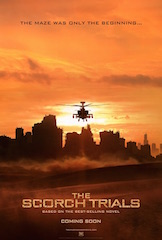 Last year Barco Escape debuted to audiences in the United States and Europe with The Maze Runner, earning rave reviews from moviegoers and critics. Directed by Wes Ball and released this month by 20th Century Fox, Maze Runner: The Scorch Trials picks up where the original film left off, with Gladers facing a new set of challenges on the open roads of a desolate landscape filled with unimaginable obstacles.

Audiences that experience Maze Runner: Scorch Trials in Barco Escape can expect to see more than twice as much content across all three screens as shown in the first installment. This chapter's best adrenaline moments are transformed from a single screen into an ultra-wide, fully immersive experience that brings the entire theater to life.

“The intensely cinematic, suspenseful nature of The Maze Runner serves as the perfect opportunity to showcase the larger-than-life, immersive qualities of Barco Escape,” said Todd Hoddick, CEO of Barco Escape, based in northern California. “Movie audiences will again be taken on the ride of their lives during the Barco Escape scenes, not just watching but virtually being in the movie.”

Recognizing an opportunity to bring fresh, groundbreaking content to the up-and-coming generation of moviegoers, Barco collaborated with Devin SuperTramp – a YouTube filmmaker 3.4 million subscribers – to develop an exclusive piece for Barco Escape. The adventure short will be shown prior to The Maze Runner 2 film in select locations equipped with Barco Escape, providing an exciting way to engage audiences further in the Barco Escape experience. This is the first commissioned piece with Devin Super Tramp with plans already in place for a second.

The world’s largest theater circuits are jumping in to be one of the first to showcase their movies in this groundbreaking, immersive format. Cinépolis was the first to debut Maze Runner: The Scorch Trials”in Barco Escape in Mexico City last week, with Cinemark, Santikos, Kinepolis, Cinema West, Santa Rosa Entertainment Group, Odyssey Entertainment and Camera Cinemas set to premiere the movie at select cinemas beginning September 18. Kinepolis will once again lead the European launch beginning September 23, with China rounding out the full Barco Escape global installation.

“We are excited to collaborate with our valued cinema partners in realizing our dream of elevating the movie going experience to never-before-seen levels,” said Wim Buyens, senior vice president for Barco. “As exhibitors continue to embrace Barco Escape as a way to differentiate themselves in the market, we will continue to work with film studios to create bold, innovative movies and alternative content that fully leverage the visually spectacular capabilities of this format.”

In addition, Barco recently announced a five-year, multi-title per year agreement with 20th Century Fox to release more immersive films in Barco Escape. The company also inked a deal with Jerry Bruckheimer Films to use the Barco Escape technology on a new, upcoming project, along with re-envisioning a classic Bruckheimer film in the Barco Escape format.