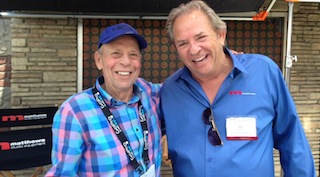 “It is with profound sorrow that I must share the passing of my friend and the original founder of Matthews Studio Equipment, Roy Isaia,” says MSE owner and president Ed Phillips. “On February 16th Roy lost his battle with Leukemia but in keeping with his feisty personality never gave up the fight.”

Isaia pioneered so much of what is still used today by production communities all over the world. “We had a lot of fun together developing many of the tools of our trade with the industry’s best cinematographers, key grips and gaffers,” Phillips recalls. “Roy was a very clever guy and a good conversationalist with always something to say and with a great sense of humor. Most importantly, Roy was a very kind and thoughtful human being.”

Isaia climbed up the ladder in the industry the right way – with hard work and a strong sense of himself and what was needed in the production community. In the 1960s, as a young key grip and head of the sewing room at Paramount, he worked on iconic movies like The Odd Couple, Rosemary’s Baby, Barefoot in the Park and True Grit. He was simply fed up with the equipment and, one day when someone dared him to make something different, he quit Paramount and did just that.

By day he worked as a grip on commercials for Sandler Studios and FilmFair – and on his own time began creating equipment on the side. His Dots and Fingers (made for Bardwell & McAllister) got noticed by people like Bill White Sr. – and his tools began to sell in Canada to what eventually became the William F. White Company.

A relationship fostered at FilmFair with a young future cinematographer, Fuad Said, proved to be key to Isaia’s move into equipment. Said’s idea was to construct little trucks – customized vans. Isaia saw a problem – the interior storage was a system of pigeonholes. It was then Isaia realized that, with the right equipment, production didn’t need separate grip and electric trucks – but Universal stands, so everything could be packed into one truck.

By 1970 Isaia gave up his day job and formed Matthews (named after his son). He began outfitting Cinemobile Systems trucks, with construction supervised by a young man by the name of Ed Phillips. The trucks began servicing movies like The Organization and Little Big Man.

They started to build folding C-stands, and incorporating Phillips’ spring-load the folding mechanism. Phillips left Cinemobile for Matthews. “It became the place to be on Saturday,” Phillips recalled. “There would often be a couple of six packs and a group of top notch professional cinematographers, gaffers or grips fielding needs to spark our creativity.” Soon the two were consulting for cinematographers like John Alonso ASC on the Steve McQueen film Bullet and on Chinatown with Jack Nicholson.

“One of the reasons Matthews became so well-known was Roy’s enthusiasm,” says Phillips. “He didn’t wait for customers to come to him – he went to the far corners - literally – to introduce his products. With the ink still wet on the corporation’s papers, he took off to Paris to show everyone overseas what Matthews could do. Orders came pouring in.”

In the later part of 1976, Isaia sold the company to Phillips and moved on to pursue other new and challenging opportunities. But he always had a word of encouragement and insight for his “baby” Matthews Studio Equipment. That will be sorely missed.