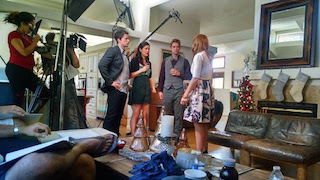 Cinematographer Carmen Cabana relied on camera support products from Manios Digital and Film while shooting on location for the new romantic comedy Holiday Breakup. Cabana employed a Cartoni Laser head and tripod system, along with a Vocas handheld rig to support the Blackmagic Cinema Camera that she used to capture principal photography.

Holiday Breakup was written by Temple Mathews, known for his work on such Disney animated features as Return to Never Land and Little Mermaid 2. Mathews also makes his directorial debut. The movie stars Manon Mathews, Shawn Roe and Katie LeClerc in the story of a couple who attempt to hide their breakup from family members during the holidays. “The film was very well written, which made the shoot very easy,” says Cabana. “Temple had a clear vision, his actors had great chemistry and the production was a delight.”

The movie was shot in Southern California. Cabana, whose previous credits include Ride the Thunder and Letter to Elena worked with a small crew and often shot with natural light. “We had a lot of exterior shots but weren’t able to use overheads to diffuse light,” she recalls. “We had to get creative in how we used the sun to make the actors look their best.”

The Cartoni Laser head and tripod’s lightweight and portability helped Cabana set up and shoot quickly. “During production, time is money,” she says. “When tools perform as they are supposed to, everything flows. I never had a problem with the products supplied by Manios. That allowed me to focus all my attention into being creative.”

The Laser’s stability and fluid movement allowed Cabana the flexibility to design complex, interesting shots. “I use movement to tell the story,” she explains. “On other shoots, I’ve had a slider, a dolly, a Porta jib and a crane, but in this case we had a tripod, a Porta jib and the Vocas rig, which allowed for the option of handheld. I enjoyed the lightness of the camera and the Vocas rig because I could shoot for hours and never get tired. I was also very impressed with the stability of the tripod. Despite its lightness, we got very steady material which is what we desired for the feel of this film.”

Holiday Breakup is currently in post-production. “I look forward to using more products from Manios Digital & Film in future productions,” says Cabana, “and I invite everyone to check out our film Holiday Breakup.”