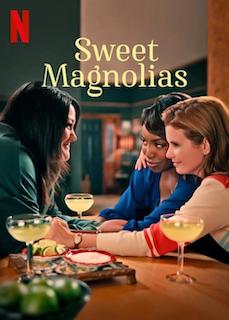 Netflix’s Sweet Magnolias is a dramatic romance tale set in the South about three lifelong friends navigating their personal and professional priorities and relationships alongside one another. Sweet Magnolias cinematographer Brian Johnson is a Gemini Award nominee, a two-time Golden Sheaf award winner and recipient of two Leos, whose resume includes The Killing, and You Me Her, to name a few. He was joined on the series by Tyler Blackwell, digital imaging technician, whose credits include One Night in Miami…, Ant-Man and the Wasp, and Women of the Movement, among others. Johnson shot with a Sony Venice full-frame digital cinema cameras. Blackwell follows the production on a combination of Sony PVM-X2400 and BVM-HX310 4K high dynamic range monitors.

As high dynamic range comes to the forefront of productions, Blackwell explained its appeal. “On Sweet Magnolias, we’re delivering a show in SDR and HDR.  My hyper-critical eyes are on every frame and having HDR monitoring on-set has been very helpful in pushing a different standardized look.  We use Dolby Vision, which I think is the pinnacle of HDR and provides the best viewing experience for our devoted fans.”

Blackwell said, “After some trial and error using other equipment, as well as a good deal of research and development, I found my way to the Sony 4K HDR monitors.  On Sweet Magnolias, we use three PVM-X2400s and one BVM-HX310, with the X2400s on my cart and the main cart, while the HX310 is on the HDR cart, which is in our command center – the DIT tent.”  Johnson added, “The DIT tent is pretty impressive. It has an array of Sony monitors, and it truly offers the best visual representation of what we’re going to ultimately end up with.”

Blackwell explained, “We use the BVM-HX310 to make sure the team is comparing my stills to what they’re viewing in their environment and ensure everything is lined up and accurate to what Brian and I have created.” 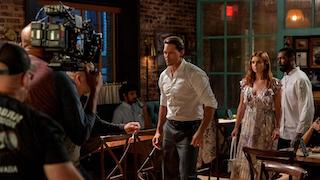 Blackwell already owns two BVM-HX310s. “The fact that the HX310 and X2400 are an extremely color accurate match and work well together is very important,” he said. “We even had a scenario where Brian and the crew were shooting on the rooftop of a building, and we brought the HX310 up so that Brian could view what was being shot in real time. Because of the size and the weight of my cart, and the facility having no elevator, rolling my cart in wasn’t an option. This is where the X2400 really shined. I was three floors down, operating the cart and relaying between Brian and myself to ensure he could match what he was looking at with what he wanted to see. I had one of the X2400 monitors in HDR mode and the other in SDR mode.  Brian was monitoring upstairs in SDR on the HX310 but I was still able to have the environment that we typically have, where the HX310 is usually in HDR and the X2400 are typically in SDR mode on the cart.”

Accommodating an HDR viewing environment is also important to Johnson, despite the understanding that he’ll primarily be viewing content on the SDR monitors and many of the show’s viewers will be consuming Sweet Magnolias in SDR.  He realizes there are certain situations where having an HDR vantage point helps enable his creativity and ensures the best viewing experience.  He explained, “In scenarios where there’s a wider field of view or where there are multiple windows looking out, we’ll put that up on the HDR monitor to see the perceptual effect of the bright windows.  Even if they’re not clipping, in HDR they can be so bright which allows us to gain perceptual information beyond any waveform information, so we can adapt our strategy to mitigate the brightness.  When looking at an SDR image, you don’t always have that same insight.” 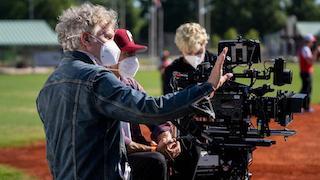 Johnson added, “I haven’t monitored in HDR on-set before, but I found it really comforting and handy to be able to, particularly when we’re getting close to a place that we feel good about the lighting in SDR. Once I check the HDR monitor, we can bring the highlights down more, if needed, or flag elements to address in post.  Using the monitors allows me to know I’m in a good place with the HDR deliverable, which is invaluable.”

Johnson, who first used the camera to capture Sweet Magnolias in 5.7K, 16:9, remarked he was “really happy with Venices’s representation of contrast and color.”  He initially gravitated toward the camera due to its ability to meet Netflix’s delivery requirements and its “super awesome” large format sensor.

Johnson noted, “I knew that on this project, we were going to want to limit the depth of field as much as possible on stage, so I was really keen to go with a large format sensor.  It worked out that the Venic was our best candidate and aligned with our budget.  I had obviously read a lot about the Venice and some of my colleagues had shot on it and had really great experiences.  I was curious and excited to work with Venice, and it’s proven to be an awesome camera.  It won’t be the last time I use it, for sure.” 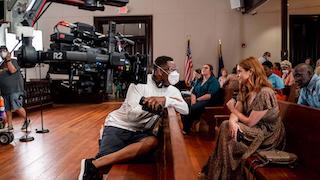 From Blackwell’s DIT perspective, he also appreciates the Venice. He explained, “To be able to work with a piece of technology that can see more color than the human eye is pretty inspiring. To know that we have as much as what we can perceive on set to work with is incredible.  In addition, from a technical standpoint, the ISOs we’re using enable us to make sure that we’re maintaining shadows or maintaining highlights depending upon the scene and the lighting environment that we’re in.”

Blackwell also pointed to the use of ART files, a technology that provides bit-level accuracy when utilizing a 3D LUT for on-set monitoring and improves image integrity for critical viewing applications.  He found that ART extensions provide the camera operators and assistants with insight, even when Blackwell’s not on-set due to COVID restrictions.  He explained, “Being able to leave Brian and leave the department with a camera that’s outputting the show LUT in an ART was critical for Brian to be able to continue doing his job without someone like me there keeping an eye on things.”

In addition, Blackwell values Sony’s SxS cards, especially their dual record functionality.  He described the benefits saying, “We used dual record on Sweet Magnolias, recording to AXS and SxS media to make sure that we have a backup because it doesn’t matter what camera system you’re working with, accidents happen.  Cards can get pulled out while you’re recording or there’s a power loss or a file corruption.  Being able to have two separate versions of your media recording at the same time is a great safety net.”

Sweet Magnolias is streaming now on Netflix. Season 2 was released on February 4.