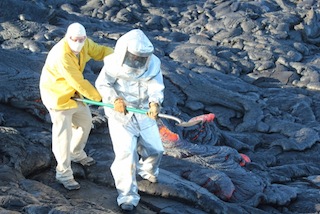 Lava Land, shot on location on Hawaii's Big Island in stereo 3D follows the exploits of brave scientists and hardy residents, from rainforests to barren rock, where lava flows from boiling vents. The footage also reveals one of the world’s most active volcanoes, Kilauea, where the Hawaiian Volcano Observatory is situated, recently celebrating over one hundred years of research where its mission is to help protect life through ongoing research.

Electric Sky was commissioned by The Weather Channel to create the four 30-minute episodes in 2D. They also future-proofed the series in stereo 3D formats, and did so for two one-hour versions of the program which were co-produced specifically for Discovery Europe and Sky. The Weather Channel series Lava Chasers aired in the U.S. in June 2013. The series will air on Discovery and Sky 3D in the UK in August.

Filming in potentially dangerous environments, exposed to the weather, toxic gases and molten rock was a real test for the film crew and camera equipment but everyday for the HVO. The film also takes audiences on a journey with the Island of Hawaii's Civil Defense and Volcanoes National Park's rangers and officers on the ground, in the jungle and up in the air in helicopters as they show viewers what their roles entail.

The program includes footage of Tom Pohaku Stone who resurrected traditional Hawaiian surfing and is now doing the same for the ancient art of he’eholua rock sledding, by building a fifty-foot rock luge run. Photographer Brian Lowry's inspirational story is also told as he tries to capture the magic of the volcanoes making the 25 mile hike for 22 years through the lava fields on a weekly basis. These hikes would be backbreaking for anyone, but Lowry, born with severe disabilities, does not let that slow him down. 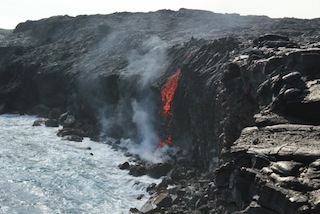 The challenging and extremely dangerous filming environment which included aerial helicopter shots, footage from active volcanoes on hot lava surfaces as well as underwater filming, all using different cameras, meant that the footage received was uncontrolled and had to be stabilized in Mistika at BTV Post. Ian Grey, colorist and online editor was responsible for the entire post-production of the complex project, working with George Dutton online stereographer at BTV Post.

Grey said, “The production team brought back some truly stunning images of lava deltas but were forced to shoot a lot of the footage at a distance through heavy plumes of white smoke. This caused the lava to become lost and flat within the image, but with Mistika I had the ability to isolate the colors of the lava, using its wide range of qualifying tools, allowing me to boost the colors of the lava to really accentuate the warm hues. Combined with pre-sets or hand-drawn shapes, which I could track, I was able to do the corrections required.”

“The program explored the submarine volcano off the coast of Hawaii, which required underwater filming. During the course of the shoot a globule of water became visible on the lens in one eye causing the illusion of 3D to be broken,” said Grey. “Combining multiple features of the system I was able to paint out the globule with information from the other eye and then using the composition and stereo effects I could converge the fix to sit at the same depth as the rest of the shot. With Mistika’s all in one box solution I was able to keep the sequence in the show and in 3D.”

The commissioning editor, Jim Gagne for TWC was delighted with the grading and commented on the stunning results achieved by BTV Post. Grey said, “Using Mistika’s stereoscopic correction tools, we were easily able to address any problems that arose from filming an observational documentary but there was one sequence in particular that proved problematic.

Nick Kennedy, series director working for Electric Sky said, “With delivery deadlines looming, the Mistika delivered on its promise to quickly and effectively correct the inevitable raft of technical problems that come with Stereo 3D production in extreme environments. And with every iteration Mistika is quickly evolving into the industry's best grading tool, even with up to four different cameras shooting any scene, we left the grade with a consistent look, and some very hot looking lava.”