Making Heads We Do 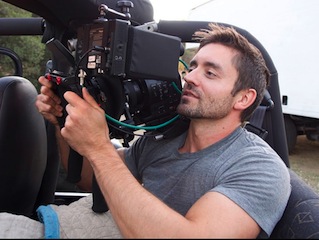 When shooting his recent independent feature Heads We Do, cinematographer Andrew Huebscher faced challenges including a tight budget, a 15-day shooting schedule, exterior night scenes, and the need for outstanding motion-picture image quality. Heads We Do is an indie comedy about two best friends, Katherine and Samantha, who pretend to be in a relationship in order to attend a free couples’ retreat. They go, hoping to spend the weekend relaxing by the pool and gathering some good stories to tell when they get home, but instead end up being drawn into the group dynamic and find that the weekend changes them – and their relationship – in ways they never considered.

Huebscher chose Canon EOS C300 Cinema cameras for the shoot for a variety of reasons. “The EOS C300 camera delivers a high quality, cinematic look in a compact package,” he said. “And the ability to use Canon EF still lenses alongside standard motion picture film-style accessories makes the camera scalable from run-and-gun shooting up to studio-style work.”

According to Huebscher, numerous long dialogue takes, strong ensemble performances, a rigorous production schedule, and frequent changes in camera set-ups necessitated both the high quality image capture and the extreme mobility of Canon EOS C300 Cinema cameras. He added that the EOS C300 cameras provided him with the creative freedom to shoot Heads We Do as director Andrew Putschoegl desired, and within the budget allowed. Recording to two Compact Flash cards through hot-swappable dual slots, the EOS C300 camera was able to provide up to 80 minutes of recording per 32GB CF card.

“We were stretched to the penny on this movie, and we had some scenes that were upwards of six or seven pages,” Huebscher added. “When film was the only viable capture medium, this would have amounted to shooting 600 feet of 35mm – with raw stock, processing, and telecine costs totaling hundreds of dollars per take. But with the CF cards in the EOS C300 camera, shooting time was never a hindrance for us.” 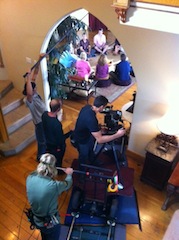 “The mobility of the Canon EOS C300 camera was a key factor for us,” Huebscher reiterated. “We didn’t want a camera that was going to be a beast every time we needed to move it across the room for a different angle. Larger cameras can really slow you down, especially when you’re ‘in the moment’ with actors and you need to be able to reset something quickly. The EOS C300 camera is versatile enough that you can work with it in a number of different ways. It isn’t cumbersome, and it can be used in tiny rooms if necessary. It’s comfortable in handheld or shoulder-mounted configurations, and the detachable top handle allows for close-to-ground operating.”

Huebscher first learned of the advantages of the Canon EOS C300 when he used one to shoot a network comedy series. He was so impressed with its image quality, mobility, performance, and affordability that he purchased one for himself. He used two of the cameras to shoot Heads We Do.

“I had looked at another digital cinema camera that was priced similarly to the EOS C300 camera but it was twice the size, would have required an external recorder, and we didn’t have the budget to rent the recorder or a crew to support a larger camera,” he recalled.

According to Huebscher, his use of three Canon EF series still photography lenses further enhanced production economy. A crucial lens was the Canon EF 24-105mm f/4L IS USM zoom, which features built-in Canon Optical Image Stabilizer technology. Huebscher mounted an EOS C300 camera onto a “hostess tray” on the side of a car, and noted, “The 24-105 zoom virtually eliminated vibrations that often accompany car rigs. With larger cameras, we’ll sometimes deploy gyro motors or image-stabilized heads, but the built-in optical stabilization of this lens effectively achieved the same thing, saving us time and money.”

“We also used the Canon EF 70-200mm zoom for some longer telephoto shots, and a Canon EF 16-35mm ultra-wide zoom lens for a couple of situations where we needed to be very wide but still have the short zoom range that we couldn’t get from the [third-party] prime lenses we were using,” Huebscher said. He added that the three manually operated glass Neutral Density filters built into the EOS C300 were also an advantage.

“Adding an ND filter just by flicking a switch on the side of the EOS C300 camera was a lifesaver,” he noted. “We were shooting in Malibu and battling frequently changing weather. Being able to instantly adjust ND via a switch meant minimal reset time between takes. If we had been dropping and pulling ND filters, it would have slowed us down considerably.”

“The Canon EOS C300 camera’s ability to crank up the ISO beyond where I would normally be comfortable on a digital cinema camera is very impressive,” Huebscher said. “With just 15 days to shoot a feature you’re working crazy fast. Long scenes and a limited budget don’t let you spend as much time on lighting set-ups as one would like. The EOS C300 camera enabled us to work at lower light levels but still keep the images clean. There were some instances where we used available light and only needed a little extra illumination to augment it.”

That said, Huebscher cautions against the idea that digital cinematography doesn’t require careful, well-crafted lighting. “My approach to lighting is the same digitally as with film. The difference is that a camera like the EOS C300 allows me to dig into the shadows a little more, making it friendlier in available-light conditions. Frankly, I was shocked by how far we could push the ISO on the EOS C300 camera and still be within acceptable noise levels.”

“The moveable LCD, combined with a Movcam custom top handle for the EOS C300 camera allowed various mounting options to accommodate all flavors of ergonomic shooting,” he said. “Usually my assistant would use the onboard LCD, and I would operate off an externally mounted display. In really tight spaces, I’d just simply use the small EVF. The director and other crew viewed a 17-inch monitor for each camera from the HD-SDI output. The internal menus are intuitive and straightforward, and you can access them via the side buttons or top-mounted LCD. There’s also a luminance waveform on the LCD display, which I prefer over zebras and histograms. It’s all intelligently designed and allowed us to keep up with the pace of the shoot.”

“The EOS C300 camera post-production experience is easy and flexible,” Huebscher said. “You can edit immediately by dropping the MXF files into Avid, FCP, or Premiere. And the Canon Log gamma setting on the EOS C300 camera gave us pleasing images right out of the box – it’s not totally washed out. Having worked as a colorist, I knew that its 50 Mbps data rate combined with the 4:2:2 color sampling and Canon Log meant flexibility in grading. The images are filmic, tack-sharp, and render skin tones beautifully.”

“We ran dailies on set,” Huebscher continued. “After pulling a CF card, our data wrangler would make backups. The original MXF files were then loaded into DaVinci Resolve color correction software, where I’d make a quick one-light grade, and then we’d export Avid-specific MXF files for editorial. The transcode time on a new PC was relatively fast at about 30 frames per second – much speedier than if we had been debayering larger raw files. We turned around graded dailies the same day, thanks to the ease of the EOS C300 camera’s native recording format.”

“The Canon EOS C300 is the perfect indie-friendly camera,” Huebscher concluded. “Its compact size and weight, combined with professional features like 4:2:2 internal recording, Canon Log gamma, SMPTE time-code inputs, and low-light capabilities, really saved the day. We were all impressed by the images it captured.”