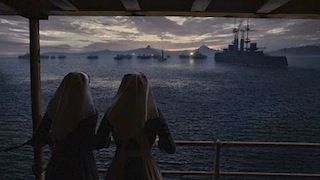 Based on Peter Rees’ book The Other ANZACs, ANZAC Girls tells the true story of five military nurses from Australia and New Zealand who served with Allied forces during World War I. Witnessing the horrors of war, the women experienced severe hardships while tending to the wounded and formed bonds of friendship that would last a lifetime. As series producer Lisa Scott (who produced the series with Felicity Packard) explains, the series “offers unique insight by showing how the war affected people, other than soldiers on the line.” The first episode premiered on Australian TV earlier this month and got exceptional ratings around Australia and much critical acclaim.

ANZAC Girls, a six-part mini-series produced by Screentime, a Banijay Group company, for ABC-TV, was a rare television project for Adelaide visual effects studio Rising Sun Pictures, better known for its work on Hollywood blockbusters such as X-Men: Days of Future Past, Gravity, and The Great Gatsby. 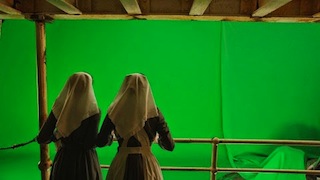 Production of the series spanned three months at a number of sites in South Australia meticulously transformed into war locations representing, among other things, Mena Camp outside Cairo, a field hospital on the Greek island of Lemnos, a casualty clearing station near the Somme on the Western Front, the Cairo docks at night and the railway station of Rouen. RSP artists augmented these practical locations with CG set extensions and matte paintings, and dropped in CG-animated warships, trucks, aircraft and trains. Additionally, the studio contributed to recreations of the sinking of the New Zealand troop ship S.S. Marquette (which happened off the coast of Salonika in 1915) and the Allied landing at Gallipoli.

The RSP team went to considerable lengths to achieve historical accuracy in its digital environments. Reproducing the ports of Cairo and Alexandria proved particularly challenging.

“With all the troubles happening in Egypt while we were in production we couldn’t go there to shoot anything or hire a crew. It was potentially too dangerous,” Crosbie recalls. “So, instead we spent a lot of time hunting for library footage that we could then redress or rebuild. Scott Bird and his art department did a fantastic job in supplying us with historical material.”

Additionally, Crosbie and his crew shot photographs of buildings in Adelaide that were built pre-World War I and incorporated them into visual effects environments. They also populated scenes with soldiers, nurses, moving vehicles and animated environmental elements to bring them to life.

Producing visual effects for television is quite different from producing effects for a blockbuster movie. The production schedule is significantly shorter and the budget more modest. Where it is not unusual for a visual effects studio to spend months perfecting a single visual effects scene for a studio feature, RSP had just eight weeks to deliver the dozens of visual effects shots included in the six parts of ANZAC Girls. 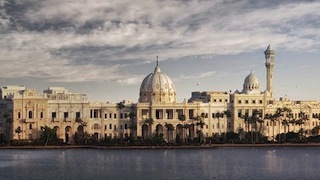 To avoid compromises in quality, RSP got to work early. Artists began building models of ships, trucks and aircraft while production was ongoing. Crosbie traveled to the set to confer with the directors and other members of the production team on how to shoot individual shots in order to speed subsequent visual effects production. “It was a very collaborative effort,” he recalls. “I’d let them know what we could bring to each shot or how they might shoot something to limit the amount of difficult work required later.”

Among the most ambitious scenes in the series is the landing at Gallipoli. The scene is revealed from the point of view of two nurses standing on the deck of a ship some distance from shore. Lisa Scott compares it to a scene from the D-Day landings. “We had hundreds of ships, observation balloons in the air, Turkish guns,” she recalls. “Explosions were occurring all around.

Each of these elements was built on top of the other in order to create a very believable, shocking and frightening moment for these two nurses, standing on a ship and not knowing what was coming towards them.”

RSP artists spent long hours integrating CG elements with the live action and ensuring that each part conformed as closely as possible to the actual events in April 1915. “Gallipoli is very well known in Australia, so we had to get that right,” says Lisa Scott.

Indeed the historical significance of the story lent a certain gravitas to the enterprise. “We all felt an obligation to tell the story with every cent we had available,” Scott observes. “Rising Sun was certainly on board with that. I wanted to get maximum value for our dollars and they delivered in spades. As was everyone involved in this project, Richard, Tim and their team were inspired by the story of these extraordinary women.”

Crosbie concurred, noting that ANZAC Girls provided the perfect opportunity for RSP to test its mettle in television. “We had a long list of shots and a tough schedule, but our team really enjoyed it,” he says, adding that they were pleased to have a part in drawing attention to the little-known chapter in history of the contribution of the nurses. “It’s a poignant story and it’s about bloody time that it was told.”