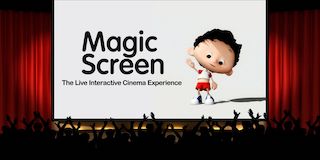 MetaMedia, Howie Mandel’s Alevy Productions and Super 78 Studios are partnering to bring Magic Screen, the world’s first interactive platform for animated and live content, to cinemas and other out-of-home venues around the world.

“Magic Screen is taking immersive technologies to the next level,” said Mandel. “With Magic Screen, our animations that used to take 6 months can now be written, recorded and produced in real time. Thanks to our partners at Super 78, Microsoft and MetaMedia, we’re going to revolutionize the moviegoing experience in a way that will allow trailers, advertisements, gameshows and more to be seen like never before.”

“Following the introduction of digital cinema, 3D, and immersive audio, we view Magic Screen as the next leap forward for cinemas,” said MetaMedia CEO Jason Brenek. “By providing audiences direct access to their favorite characters and celebrities and allowing them to interact alongside fellow fans, the social experience in cinema can continue to be the best place to enjoy entertainment.”

“Magic Screen is a disruptor on a global scale,” said Super 78 CEO Dina Benadon. “Together with Howie Mandel and MetaMedia, Magic Screen is uniquely positioned to be first to market in creating new revenue streams for theaters beyond their traditional model. At Super 78, we’ve produced interactive theme park shows for decades and now with Magic Screen, audiences can engage in custom experiences at local movie theaters.”

“On the road to post-pandemic recovery, the film exhibition business will require new business models and programming,” said Magic Screen general manager Jay Williams. “All from one location, MetaMedia and Magic Screen will provide consumer-facing interactive original shows, ads, trailers, immersive games and standup comedy events to exhibitors in cities around the world. Magic Screen’s interactive platform is a one-of-a-kind solution that’s available for studios, producers, and IP holders to showcase their content and characters to consumers in a truly custom and memorable way. “

The companies say they will provide Magic Screen entertainment, also called interactives, to hundreds of cinemas, starting in major U.S. and Canadian cities later this year.