Macbeth, in Black and White 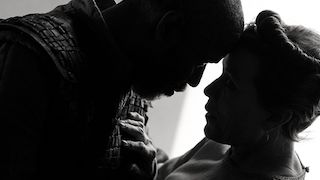 The Tragedy of Macbeth—written four centuries ago for the stage—has been translated to the screen throughout cinema history. Replete with medieval atmosphere, witches, and murder, the iconic tale has now been retold by director Joel Coen. Working with director of photography Bruno Delbonnel ASC, AFC, Coen developed a visual approach to the bloody proceedings that emphasizes Shakespeare’s matchless language and the faces of the actors delivering it.

This strategy, designed to eliminate distractions, led to black and white images, framed in the squarish Academy format, filmed on minimalist sets built on stages at Warner Bros. in Los Angeles.

“Black and white becomes abstract and graphic by nature,” says Delbonnel, who had previously worked with the Coen Brothers on The Ballad of Buster Scruggs and Inside Llewyn Davis, among others. “If the color blue appeared in a scene, it would be more likely to distract from the words of Shakespeare. When that blue tone is merely a shade of gray, the faces are more present.

“The decision to shoot in Academy aspect ratio [1.37:1] also came from the desire to lose all kinds of ornamentation,” he says. “When you go in for a close-up, the face is framed with nothing on the right- or left-hand sides. With anamorphic, for example, there’s air on both sides.”

The stripped-down aesthetic informed the sets, costumes, and lighting as well. “There were no practicals in the sets, no torches except occasionally at night, and no windows,” he says. “The idea was to give shape to the set with light only, and to create abstraction with the light on very simple surfaces.”

With gaffer Mike Bauman, Delbonnel created soft fill light for the sets and lit with much harder, contrasty light on faces in the foreground. Because the resulting images would be black and white, color temperature was not a significant concern. 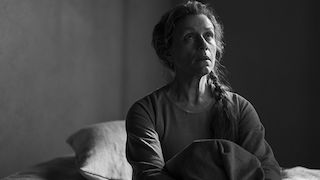 Delbonnel shot with the Arri Alexa LF camera and Cooke lenses, captured in the rich ArriRaw file format. Monitors on the set displayed the images in black and white, although the camera sensor was capturing the full range of color information. He says he almost never pushes beyond 800 ISO, and usually stays at 500.

“I was not interested in recreating an old-fashioned style of photography, and I didn’t want to refer to other black and white movies,” Delbonnel says. “I wanted something very crisp and modern in many ways. When you see skin, there’s a presence. So, the Alexa LF was perfect for me because it gives crisp 4K images. The LF camera and Cooke lenses were the perfect combination.”

Delbonnel calls himself “an Arri person,” having shot on Arri cameras, with one exception, going back at least 25 years. “The ArriCam viewfinder was probably the best ever,” he says. “Nothing better. When I light through the viewfinder, I need to see an accurate image. With digital, the Arri color science is great—it suits me perfectly. With ArriRaw, it’s like a pure neg. There’s nothing better. You have all the information you need, and then you can manipulate the image later, in post, as much as you like.”

Surprisingly, Delbonnel says he has not seen the finished film. “I don’t watch the movies I’ve done because I see all my mistakes and ways I could have done better,” he says with a laugh. “What makes me happy is that Joel thinks it’s great.”

The Tragedy of Macbeth premiered at the New York Film Festival in September 2021 and will is now streaming on Apple TV+.