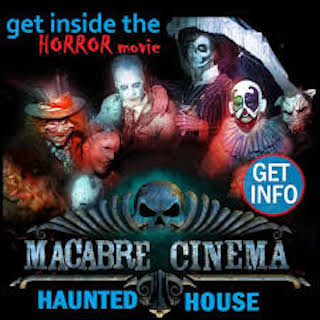 With Halloween here, many people will add some fright for fun into their plans. Watching horror movies and going to a haunted house are popular traditions. However, Kansas City's Macabre Cinema flips the switch and takes thrill seekers from watching a scary movie to being the victim in this horror flick. The triggering fear that horror films evoke from their music, characters, and scare methods all come to life in this unique format of a haunted attraction.

Haunt goers start in Macabre Cinema's abandoned theater seats of a towering building from the 1880s in the West Bottoms across from the Historic 12th Street Bridge (adjoining the area with Kansas City's downtown). The spirits inside usher theater goers through the slit in the screen to discover they are now in the movie.

Horror legends, akin to movie favorites like Chucky, Michael Myers, Ghostface, Pennywise, Pinhead, Leatherface, Jason, and Freddy, lurk around the many floors of bone-chilling haunt scenes. Fans of horror classics The Mummy, Hellraiser, and Killer Clowns from Outer Space, may find the scenes somewhat familiar because they are the actual movie sets from horror films modified to take on the real-life haunt action of the cast and victims. 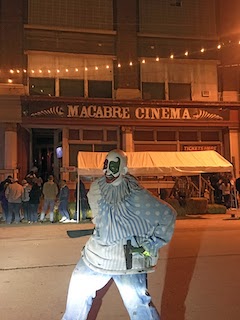 The horror movie sets were initially acquired by a renowned haunted attraction in Salt Lake City. When the owner retired, she sold them to Macabre Cinema operators, where they've been a fixture for 15 seasons. Macabre Cinema didn't open in 2020 due to the pandemic, and its fans were furious. While neighboring Beast and Edge of Hell Haunted Attractions were open, many haunt enthusiasts screamed for the return of this haunt, given its fans loved their familiarity with the slashers and stories.

"We have phobias from snakes to claustrophobia at Hell and Beast's time travel through the haunt reflects the periods in history where the beast of humankind was terrifying," said Amber Arnett-Bequeaith, the Queen of Haunts representing the Kansas City's West Bottoms haunted attractions. "Yet as demand for frightfully-fun entertainment grew, we knew adding horror film favorites would add another terror-ific angle of scaring! We launched Macabre Cinema in 2007 to offer more scaring variety and methods while using the attraction to drive a greater good. We made many contributions to children's causes, including Dream Factory, Variety, and the Don't Be a Monster anti-bullying program."

Macabre Cinema is making a heartfelt push to collect cans and bags of dog and cat food to give to a local animal shelter. In exchange for a bag or can, people get a heart-pounding thrill and save five dollars per ticket at the door.