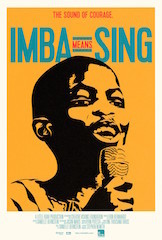 M-Go has unveiled a new monthly campaign called Movies that Matter. DreamWorks Animation and Technicolor created the video on demand service to reinforce their commitment to socially relevant films. The campaign will highlight a new film every month, beginning with the debut of the documentary film Imba Means Sing.

The film follows three children from the slums of Uganda selected to tour the world with the Grammy-nominated African Children’s Choir. Viewers follow along on the children’s journey from poverty to education as they chase their dreams.

As part of the Movies that Matter series, every month M-Go will feature a carefully selected film that drives awareness to serious social issues around the world, educating M-Go viewers through the power of movies and inspiring them to make a difference.

“We are excited to bring social action films to a larger audience through our Movies that Matter series,” said M-Go senior vice president of content, Cameron Douglas. “What’s great about this new campaign is that because M-Go empowers customers to pay only for the films they want to see, a portion of every transaction can go towards these great causes.” This month, 100 percent of film profits go towards building a secondary school for the students profiled in the film.

Imba Means Sing features the African Children’s Choir, which is composed of African children, aged 7 to 10 years old. Many have lost one or both parents through the devastation of war, famine and disease. The purpose of the choir is to raise funds that contribute to the choir’s international educational endeavors, providing unique training and educational opportunities.

In partnership with Momentum Pictures, M-Go will offer a 10 percent discount for the movie through January 31, 2016. Imba Means Sing is available at www.mgo.com/imbameanssing.

Imba Means Sing is the winner of the prestigious 2013 Sundance Collective, Best Social Impact Film In-the-Making Award and was directed by Erin Bernhardt, a Peabody and Emmy award-winning humanitarian journalist and filmmaker.

For more information you can visit www.imbafilm.com.