The Luminaries Comes to the Screen 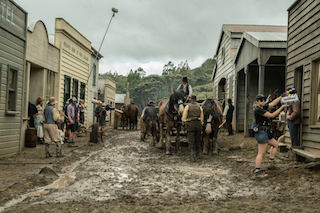 When it came time start work on the long-anticipated TV adaptation of Eleanor Catton's Man Booker prize-winning novel, The Luminaries, the filmmakers knew that one of their biggest challenges was to recreate the universe portrayed in the book. Produced by the BBC, Working Title Television and Southern Light Films and adapted for the screen by Catton herself, the six-part mini-series tells an epic story of love, murder and revenge, as men and women travelled across the world to make their fortunes on New Zealand’s South Island in the boom years of the 1860s gold rush.

Baker said, “We wanted The Luminaries to have its own aesthetic and be unlike any other show currently on screens. We wanted it to be atmospheric and cinematic, a smoky, textured world, with muddy streets, a very lived in world. Our First AD Luke Robinson managed to schedule much of our shooting to time of day, so that we could shoot a lot at the magic hours of dawn and dusk, which was wonderful.” 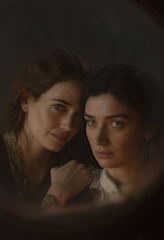 The producer Andrew Woodhead from Working Title was very passionate about the idea of shooting the show on anamorphic lenses, framed 2.0:1. Director Claire McCarthy and Baker agreed with him that it would be a great choice as they have a high production quality look and give more of a timeless quality, which was very important for a series set in the 1860s.

“I tested every anamorphic lens set that was available to us in New Zealand which is amazing – pretty much anything you could want was presented to us to play with,” Baker said. “I screened these tests to Claire and the producers, and we all felt that the Cooke Anamorphic/i lenses were the right choice. They have a high production quality look, but don’t look too ‘slick’ or modern as some of the other lenses we tested. Cooke lenses have such a cinematic quality and look filmic on digital cameras; they have a gentleness that is very pleasing and flattering, yet there is also a sharpness that makes the image bold and the faces pop in the frame. They are also lovely to handle and work with on a practical level too.” 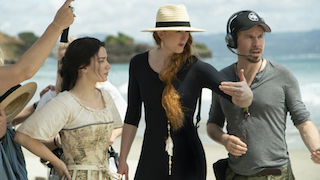 The show was shot on Arri Alexa cameras. Shooting combined location and studio work; the production team built a back-lot set comprising 1860s urban streets and a harbor, and also constructed a whole township on a beautiful property outside Auckland called Jonker’s Farm. In addition, the crew shot on the wild West Coasts of both the North and South Islands.

The story follows a large cast of characters, each variously associated with the twelve signs of the Zodiac, the planets within the solar system, and the Sun and Moon. McCarthy came up with the idea of linking the story arc of the main character Anna Wetherell (played by Eve Hewson) to reflect the Moon’s phases.

Baker looked carefully into this in order to find the key moments to light the character according to the moon phase she was in, positioning the light on her face to reflect this phase.  For these scenes, the 75 and 100mm anamorphic lenses provided a very pleasing focus edge to them, especially when shooting around T2.8-4 when shooting mid shots and close ups, to draw the attention to the characters eyes, and mouth and letting the surrounding area drop away.

Baker’s main lenses of choice were the 40mm and the 75mm lenses, and he also used the 65mm Macro as a portrait lens when shooting intimate moments. “The 65mm has a very lovely, flattering quality to it,” said Baker. “We could also get the camera quite physically close to our actors with the 65mm to give a feeling of intimacy, but with very little if any distortion.”

The Luminaries aired in New Zealand in May and was shown on BBC One and iPlayer June 21.