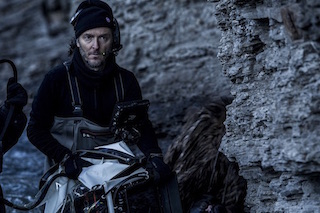 The ceremony took place here tonight at the Hyatt Regency Century Plaza. Lubezki won for the feature THE REVENANT. Cernjul won the episodic television category for CASANOVA, and Gill took the honors in the TV movie/miniseries/pilot category for MARCO POLO. There was a tie for the ASC Spotlight Award between Arkapaw for MACBETH and Erdély for SON OF SAUL.

Javier Bardem presented the ASC Award in the theatrical release category to Lubezki. Lubezki also won the organization’s top prize the past two years for BIRDMAN OR (THE UNEXPECTED VIRTUE OF IGNORANCE) in 2015 and for GRAVITY in 2014. This marks the first time that a cinematographer has won three consecutive ASC Awards in the theatrical category, and makes Lubezki the only cinematographer to claim this prize five times. He won ASC Awards in 2012 for THE TREE OF LIFE and in 2007 for CHILDREN OF MEN. Lubezki earned another nomination in this category in 2000 for SLEEPY HOLLOW.

The other nominees in the feature film category were Roger Deakins, ASC, BSC for SICARIO, Janusz Kaminski for BRIDGE OF SPIES, Ed Lachman, ASC for CAROL, and John Seale, ASC, ACS for MAD MAX: FURY ROAD.

Derek Waters presented Cernjul with the Outstanding Achievement Award for a regular episode of a TV series. His win was for The Fourth Step episode of the Netflix series MARCO POLO. This is Cernjul’s first ASC Award. He was previously nominated for HBO’s BORED TO DEATH (2012).

Jamie Lee Curtis presented the television movie/miniseries/pilot award to Gill for the CASANOVA pilot (Amazon). Gill previously won an ASC Award in 2004 for HITLER: THE RISE OF EVIL, and has also received nods for JOAN OF ARC (2000) and THE BORGIAS (2014).

Also nominated in the category were Martin Ahlgren for the BLINDSPOT pilot (NBC), James Hawkinson for THE MAN IN THE HIGH CASTLE pilot (Amazon), Jeffrey Jur, ASC for BESSIE (HBO), and Romain Lacourbas for the MARCO POLO pilot (Netflix).

Roberto Schaefer, ASC, AIC announced that Arkapaw and Erdély tied for the ASC Spotlight Award. Arkapaw won for MACBETH and Erdély won for SON OF SAUL. This was the first nomination and win for both cinematographers. The Spotlight award recognizes outstanding cinematography in feature-length projects that are screened at festivals, internationally, or in limited theatrical release. Also nominated in this category was Cary Joji Fukunaga for BEASTS OF NO NATION.

Lowell Peterson, ASC took home the Career Achievement in Television Award, which was presented by Gina Rodriguez. He is EMMY-nominated for his work on HBO’s SIX FEET UNDER, and earned ASC Award nominations for the telefilm JUST ASK MY CHILDREN, and the TV series SECOND CHANCES and PROFILER. Peterson’s credits include JANE THE VIRGIN, THE FOSTERS, DESPERATE HOUSEWIVES, MOLONEY, LOIS & CLARK: THE NEW ADVENTURES OF SUPERMAN, THE CLIENT, and KNOTS LANDING, and among others.

The organization awarded director Ridley Scott its Board of Governors Award, which was presented by Academy Award-winner Geena Davis. Scott is a renowned filmmaker honored with Best Director Oscar nominations for his work on BLACK HAWK DOWN (2001), GLADIATOR (2000) and THELMA & LOUISE (1991). All three films also earned him DGA Award nominations. Scott’s most recent releases include the critically acclaimed box office phenomenon THE MARTIAN, EXODUS: GODS AND KINGS, THE COUNSELOR, and PROMETHEUS.

Bill Bennett, ASC was recognized with the ASC Presidents Award for his impressive cinematographic contributions and dedication to the ASC. The award was presented by Ron Dexter, ASC. Bennett has compiled well over 1,000 television commercial credits. Known affectionately by his peers as The Car Guy for his innovative work on automobile spots, his list of credits by sponsor not only include the big automobile manufacturers, but also a number of the top beverage manufacturers, global communications companies, airlines, and fast food franchises

The ASC Bud Stone Award of Distinction was given to Grover Crisp, EVP of asset management, film restoration and digital mastering at Sony Pictures Entertainment. The award is presented to an Associate ASC Member who has demonstrated extraordinary service to the society and/or has made a significant contribution to the motion picture industry.

For more information regarding the ASC Awards, visit the ASC website at www.theasc.com.