For the Love of Racing 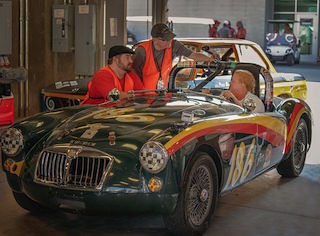 Vintage Racer is the story of classic car enthusiasts and their pursuit of fast cars primarily from the ‘50s, ‘60s, and ‘70s. Led by director, Randall P. Dark and executive producer, Stephen Brent Jenkins, the program was shot on location at the Indianapolis Motor Speedway during the Sportscar Vintage Racers Association’s Brickyard Vintage Racing Invitational.

It follows seven of over 400 drivers that raced their vintage and historic cars at the event.

Each racer featured in the documentary has a dynamic personality to match their vehicles. Many of the drivers built their cars themselves and that sweat equity married with a passion for perfection and a need for speed drives them to compete against others who share their enthusiasm and addiction.

“We follow the lives of unique individuals as they compete with some of our favorite vintage cars that have been restored and converted into custom racing machines,” says producer Mark Mcilyar. “This is an amateur sport – no prize money, no trophies – just the thrill of competition at every level.”

Using a 12-camera setup around the track, in the paddock, and along pit lane, Dark and Jenkins were able to capture compelling footage of the races, drivers, crews, and cars. Photographer Sharon Rankin took more than 7,000 still images to enhance the documentary.

“When we started the project, we thought the stars would be the fast, sexy cars,” says Bulltiger producer Kate Meehan, “but we discovered so many wonderful personalities along the way that we quickly shifted focus to the racers themselves, the love of their cars, and their camaraderie around the track.”

Bulltiger is also exploring expansion of the project to a 13 episode series, following additional racers and cars as they compete around the country.