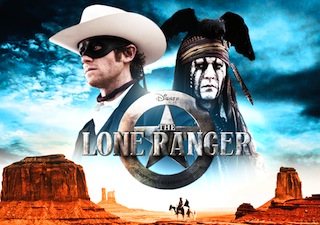 For seventy years, the Lone Ranger has been about “…a fiery horse with the speed of light, a cloud of dust, and a hearty Hi-Yo Silver…”  Here, it’s about mugging for the camera, massive special effects, and a meandering story that features Tonto more prominently than his trusted companion, Kemo Sabe.  There’s lots of entertainment value in here; but it would have been better if it had been much shorter.  The last twenty minutes are spectacular, but you have to sit through the first two hours to get to them.  Too many scenes feel too long. Too many angles and close-ups seem unnecessary. We’re forty-five minutes into the film before the Lone Ranger first puts on the mask. Even then, he’s not sure who he’s supposed to be – and neither are we.

Hammer seems miscast as the Lone Ranger, so maybe it’s good that this is really Tonto’s (Depp) story to tell. In his witch doctor make-up, with his wink-at-the-camera attitude, and eagerness to ridicule the legend’s most iconic moments, he’s not your grandfather’s Tonto.  The Lone Ranger is his trainee – and the training isn’t going well.  As this movie unwinds from his aging memory, it keeps winding back on itself, wandering into too many directions without much heart or humanity. But summer movies are often more about spectacle than story and this is structured like a great adventure. It starts strong and ends stronger. A budget north of $200 million can put a lot of big ideas on the screen, some of which seem relevant to this story.