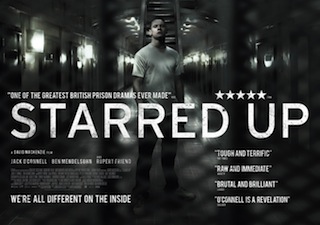 LipSync provided equity investment and full post services on Starred Up, the award-winning film starring Jack O’Connell, Ben Mendelsohn and Rupert Friend, telling the story of a troubled and violent teen who meets his father in prison. The film, produced by Sigma Films, will open in the UK on March 21.

Starred Up was graded on Baselight by colorist Adam Inglis at LipSync, and was the third film he had graded for director David Mackenzie. Inglis said, “The first thing that struck me was that this wasn't going to be a standard dull grey-blue prison movie. The art direction had used color in a very interesting way, from the headache-inducing bright yellow cell walls to the hell-like red of the isolation unit. Whilst we never leave this very artificial world of paint, metal and fluorescents, there's also natural daylight punching through the windows, out in the exercise yard and up on the top level of the prison. The range of color and light within the original material gave us a lot of storytelling and mood possibilities. This prison is a place of sensory overload and I like to think that rather than just looking real, it feels real too.”

Realism was also key for the sound mix, which was created on an AMS-Neve DFC console by Robert Farr, LipSync’s re-recording mixer. “The film was shot in a real prison, and David [Mackenzie] wanted to use the original recording as far as possible to capture the real sounds of the building. It was a deliberate decision not to have a full musical score, apart from a small amount of jarring, ‘sound-designed’ music; for the most part we created atmosphere by highlighting the loud, echoing, clattering communal areas of the prison and contrasting that with the claustrophobia of the prison cell. When the main character first enters his cell, we took out all the sound to create a strong feeling of being locked away and isolated, then as he becomes more adjusted to his surroundings we allowed more sound in. It was a very challenging and rewarding project to work on.”