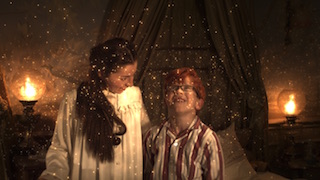 LipSync Post has provided more than 145 visual effects shots for Peter & Wendy, a TV film based on J.M Barrie’s Peter Pan directed by Diarmuid Lawrence and written by Adrian Hodges. Made in connection with Great Ormond Street Hospital, the TV movie is scheduled for broadcast on ITV over Christmas.

Produced by Headline Pictures with Juliette Films in association with Catalyst Global Media, Lip Sync Productions, and Great Ormond Street Hospital Children's Charity, the story of Peter Pan is retold through the imagination of a young girl about to receive hospital treatment for a heart condition at Great Ormond Street. Reading the novel the night before her operation, the film follows her fantasy as she fears her illness may mean that she, like Peter Pan, will never grow up. 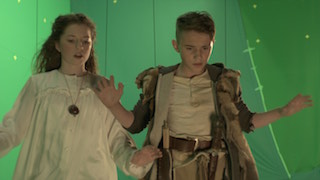 Requiring an extensive use of green-screen, the VFX shots were composed in Nuke and include Peter’s shadow, the crocodile, the Jolly Roger and a CGI-winged Tinkerbell portrayed by Paloma Faith. Wirework flights over London also took place, as well as VFX work on the London streets and Neverland itself.

Stewart Mackinnon, producer, Headline Pictures, said, "It's been a real pleasure creating Neverland and the iconic characters from Peter Pan with LipSync's army of skilled artists and all the technical wizardry that's now available. There is a wealth of talent in the UK and we feel privileged to have had the support of so many talented colleagues who helped bring this magical children's story to life."

“The sheer number of distinct, complex VFX shots to create within our budget and time constraints was a challenge both on set and in post production,” said Tim Barter, LipSync’s VFX supervisor. “There were many challenges but that's what makes a job enjoyable.  The compositing and 3D team pulled out all the stops to deliver some amazing work.”

Peter & Wendy is being distributed worldwide by Red Arrow International.