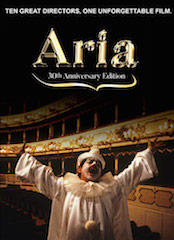 Lightyear Entertainment has announced the release of the newly-restored 30th anniversary edition of its groundbreaking multi-director film Aria. In Aria, ten of the world’s most creative and celebrated directors were each given the same brief: to choose a piece of opera music and then present a visual interpretation of that music with complete artistic freedom. Music was sourced from the massive RCA Red Seal catalog; the score features some of the world’s best opera singers.

Aria was produced by British filmmaker Don Boyd for Lightyear in 1987. Going back to the original 35mm internegative, the film has now been painstakingly restored and transferred to a widescreen HD master. Lightyear plans to make a digital print of the new transfer available to theaters for theatrical retrospectives in 2017, starting January.

The film previously was screened in recent retrospectives at the Museum of Modern Art in New York, the Brooklyn Academy of Music, and the Toronto International Film Festival. Aria was originally released in U.S. theaters by Miramax in 1987, after it debuted in Cannes as the closing night film.

“Aria was always a beautiful film,” said Lightyear CEO Arnie Holland, “and the HD master is just fantastic. Watching it this way is a revelation.”

The HD trailer can be seen here: www.lightyear.com/videos/aria