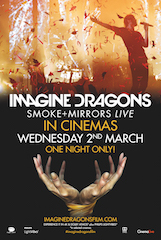 Screenings of Imagine Dragons: Smoke + Mirrors Live music concert will be enhanced with Philips LightVibes. An initial three cinemas will deploy the technology for immersive cinema with more than 790 additional cinemas offering the title via distribution, broadening access to the concert for many more fans around the world. Tyrone Walker-Hepburn, owner of the Genesis independent cinema in London, which will show the UK screening said, “As an independent cinema, we’re all about differentiating ourselves. So being able to offer interesting, premium content like the Imagine Dragons concert using Philips LightVibes really sets us apart. It helps us to attract new audiences and revenue streams, which are key to our growth plans. People describe us as a maverick cinema and ventures like this cement that reputation."

The technology is used to create a unique experience for fans in cinemas by adding dynamic, lighting effects and imagery synced to the on-screen action. This technology opens up opportunities to develop other content-rich events in music, sport, documentaries and the arts to engage new audiences.

Moment Factory, a Montreal-based media and entertainment studio which provided Creative Direction and lighting design of the Imagine Dragons Smoke + Mirrors Tour, has supported Philips LightVibes to bring the tour experience in cinemas. LED media panels that are placed on the walls of the cinema relay color and imagery synced to the screen. Surround stage and moving lights accentuate the effects. Seen in the viewer’s peripheral vision, it creates a truly immersive experience, making it feel more real. For instance the magic of the Toronto concert featuring giant columns of colorful light, is brought to life - along with the LA band’s lead singer, Dan Reynolds singing Radioactive.

“As a director I am constantly exploring new technologies to find exciting ways of connecting with audiences, seeking to enhance the experience and impact of the live music films I make.  Philips LightVibes is a superb, cinema innovation, which does exactly that. With our Imagine Dragons: Smoke + Mirrors Live concert film, it adds an extra dimension of sensory experience and immersion in the cinema. It just works - somehow making it more personal and special - we hope it will really engage fans,” said Dick Carruthers, music video and film director, who has worked with artists from Beyoncé to Led Zeppelin.

Screenings of the Imagine Dragons concert will take place March 2 at the independent Genesis Cinema in London; Odeon & UCI Cinemas Group’s KINOWELT Ruhr Park cinema in Bochum, Germany; and the Zien Cinema in Eindhoven, the Netherlands. All screenings will be enhanced with Philips LightVibes to provide audiences with a more engaging experience.

The Philips LightVibes immersive cinema experience is not only ideal for musical performances and events but also feature films, pre-show programming and advertising. The technology brings intriguing new capabilities to cinematographers and the wider creative community.