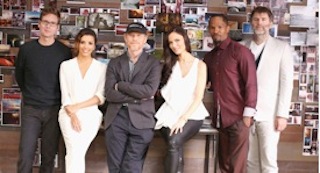 Out of the Blue, directed by Eva Longoria

…And She Was My Eve, directed by Jamie Foxx

A Dream of Flying, directed by Georgina Chapman

“It was a great honor and a lot of fun to collaborate with these talents,” says Paul Geffre, senior producer. “We were pioneering the Canon Raw 4K workflow, but bringing unique stories to the screen in 4K is what we do at Light Iron”.

Production began in January for the first Project Imaginat10n movie, Evermore directed by Biz Stone, using Canon’s new C500 camera. Two cameras captured to Codex recorders, but due to a need for a small underwater housing, a third camera was paired with a Gemini recorder. This was the first time the new Canon RAW 4K codec was used with a Gemini recorder, and also the first time with Colorfront’s Express Dailies. Light Iron technicians coordinated the groundbreaking workflow seamlessly with no delays in the production’s shooting schedule. DIT Rafel Montoya then processed the footage on Light Iron’s Outpost system. Montoya created same-day sound-synced and colored dailies using the look developed on set with cinematographer Andre Lascaris. This process was repeated for three of the other four celebrity-directed movies over the next six months.

After editorial, each of the Project Imaginat10n movies returned to Light Iron for finishing. Four of the movies received a full 4K digital intermediate. Colorist Corinne Bogdanowicz in Los Angeles worked with Biz Stone, as well as with Eva Longoria on Out of the Blue. Jamie Foxx, James Murphy, and Georgina Chapman finished their projects in New York, where Colorist Sean Dunckley collaborated with them in Light Iron’s new facility on Broadway.

The festive premiere also included the five winning shorts from Canon’s consumer film contest. The challenge for all the Project Imaginat10n participants was to create a short film inspired by ten crowdsourced photos. Collectively, the ten shorts will be packaged as A Ron Howard Presentation and are available to watch on Yahoo Screen.