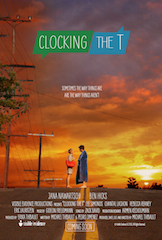 Making a film for the first time is a challenge enough in itself, but post-production can sometimes be even more daunting.  Aspiring filmmaker Michael Thibault said, “Strangely, all the things we were warned about – actors, scheduling, permits, etc – weren’t a problem at all. But when it came to post-production, it was a complete nightmare until we brought the show to AlphaDogs. We tried to get by cheap and skip using a professional post house, only to find out these freelance colorists and audio mixers have no clue as to what they are doing.”

When Thibault came to Los Angeles pursuing his dreams in the moviemaking business, he never imagined that 35 years later he still wouldn’t have made his first film.

“Seeing all these young whippersnappers out there making films nowadays made me realize I could do it too, and that it wasn’t too late,” said Thibault. “And just like that I started down the long road to writing and directing my first movie, Clocking The T, street slang for telling the truth.

The film tells the story of two people trying to come together in a world where avoiding relationships is the norm.

AlphaDogs colorists Brian Hutchings and Sean Stack created the look for the film including a movie-within-the-movie that required an otherworldly look. By keying out the backgrounds and sky, Stack was able to achieve the not-of-earth feel. 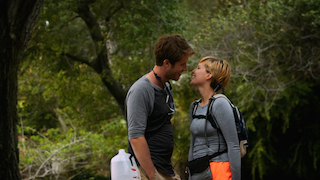 “This was fun because the color grade was so different than normal,” said Stack. The orange-red sky and strange color terrain was very cool looking, but the characters still had to look right and pop off the screen. Overall, it took a lot of masks and key-framing to get there.”

Audio engineer, Curtis Fritsch and junior audio mixer, Juan Lucas-Benavidez worked closely with Thibault to fix major problems within the audio.  “I didn’t think the sound was that bad until we listened to it in the audio bay,” said Thibault. “Then we were all eye rolls, and just kill me now. The whole damn mix is a miracle and it’s solely because of the team at AlphaDogs.”

One of the bigger hurdles was recreating work that had already been done by Thibault in Avid, which proved to be very intricate and required extensive amounts of time to translate into Pro Tools. “Due to some of the limitations between Avid’s Media Composer and Pro Tools, we had to work together on many different elements to make sure the translation worked once everything was in place,” said Fritsch. Another challenge was the amount of automated dialogue replacement that was required. Making things even harder was working with actors who didn’t have access to a studio or proper equipment. 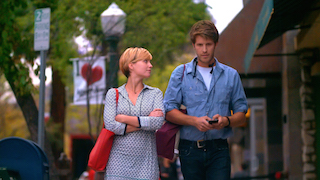 To remedy the problem, Fritsch and Benavidez used around 70 different impulse response reverbs, using reverb modeled after the actual space to make the ADR lines match better. “Some tweaked presets were used, but we also recorded and used several organic sounds,” said Fritsch. “This included my bathroom, a friend’s apartment, the outside of AlphaDogs studio, and the inside of a co-worker’s car. We ended up with 60 tracks dedicated exclusively to making the ADR match.” Audio was also enhanced with sound design elements in the movie-within-the-movie scene that included adding up to six layers of ambience just for a single shot of a spaceship.

Thibault hopes audiences will not only enjoy the film, but that it will also be thought provoking. “When I think of the best movies I’ve ever seen, they were always followed by a great conversation afterwards,” said Thibault.

Thibault was extremely pleased with the final delivery of his first film. “The whole team at AlphaDogs, in every department, really came through, over and over,” he said. “They were able to take our modest picture and track, and make it the best it was ever going to look and sound, and in some cases, even better. I would use them again without question. Despite Clocking The T being an independent film with a limited budget, they treated us, and our film, with respect. They cared about the project as much as we did.”

Clocking The T will screen at various film festivals in 2018.