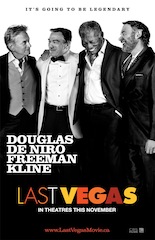 This is, at best, a mildly entertaining movie for older audiences.  The good news is – there is nothing embarrassing in it.  The bad news is – there is nothing particularly funny either.  If you’ve seen the trailers, you’ve seen most of the best jokes.  The whole movie plays like a montage of Las Vegas’s greatest hits, a look at what there is to see and do in the city.  If you’ve been there, you’ve seen and done them all. You know the stars of this movie – Michael Douglas, Robert De Niro, Kevin Kline and Morgan Freeman. Of those, Freeman is the most fun to watch because he can elicit a smile from just a twist of the head, the arch of an eyebrow.  But the real enjoyment in this movie – and there is not all that much – comes from Mary Steenburgen.  She brings a steely sense of realism, a gentle world view grounded in reality, a radiant feeling of maturity to balance the four guys who are trying to be “lads” for the weekend.  So what we have here are five great actors trying to do all they can with a script that is both predictable and underwritten.  There is very little that is fresh, nothing that’s surprising.  It’s a very light comedy with few laughs but several smiles.  The actors all look like they’re enjoying themselves, but ultimately it seems they came together for the same reason people sit at the gaming tables in Vegas:  they’re here for the money.