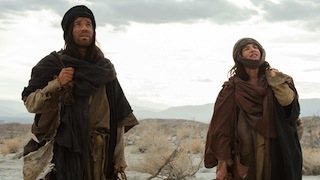 Sundance Institute and the Dolby Institute, along with the Ray and Dagmar Dolby Family Fund, announced today that Last Days in the Desert, written and directed by Rodrigo García, has been selected as the second recipient of the Dolby Family Sound Fellowship. This fellowship opportunity in collaboration with Sundance Institute provides a range of postproduction resources to allow the fellowship recipient to fulfill the creative potential of the film’s sound design. Last Days in the Desert was chosen based on the complex canvas and nuanced characters in the film, particularly the juxtaposition of Jesus and the Devil, and the human conflicts that Jesus faces in determining an ordinary family’s fate in the desert.

The world premiere of Last Days in the Desert will feature the Dolby Atmos mix at the Eccles Theatre, located in Utah at Park City High School, on January 25 during the 2015 Sundance Film Festival. Dolby Atmos allows filmmakers the creative freedom to easily arrange sounds anywhere in the movie theatre to create a lifelike cinema sound experience. The Dolby Institute’s donation of a Dolby Atmos cinema sound system is now permanently installed at the Eccles Theatre for the Park City community to enjoy.

“With the support of the Dolby Institute and Dolby Family Sound Fellowship, Last Days in the Desert can now achieve an immersive and detailed sound environment with a Dolby Atmos mix, and we are thrilled to be able to deliver this experience as part of its premiere at the Eccles Theatre,” said Vince Voron, vice president, executive creative director, Dolby Laboratories. “The permanent installation of Dolby Atmos at the Eccles is a significant step that recognizes sound as a crucial storytelling element for independent filmmakers.”

“We were excited to participate in the selection of this year’s film for the fellowship. The production team did a great job capturing the on-site soundscape of the desert. This attention to detail gives the film the most realistic source materials to mix using Dolby Atmos technology,” said David Dolby.

Sundance Institute and the Dolby Institute collaborated on the film-vetting process; the winning film was selected by a committee made up of members from both organizations, with the input of Skip Lievsay, Academy Award winning sound designer and rerecording mixer (Gravity).

The Last Days in the Desert sound team, Justin Davey and Zach Seivers of Snapsound, used the grant to enhance the film’s sound design and mix to achieve a fully immersive Dolby Atmos track, with the help and advice of Lievsay.

“I am ecstatic and very grateful that Dolby has chosen to support us,” said García. “I’ve never made a film where the physical environment was so important to the story, so the Dolby Atmos mix will make a huge difference creatively.”

“I was so hooked the first time I watched the film during the selection process that I just had to be part of the Atmos process,” said Lievsay. “The deep and intense exploration of character in this film extends naturally to the soundtrack. The opportunities in the film for sound editing and mix are fantastic, especially in Dolby Atmos. This film may also provide some answers to the question of what types of films can benefit from the Atmos format. I believe the answer is all types.”

On January 27 at the Sundance Film Festival, the Dolby Institute will host a panel discussion, Last Days in the Desert: The Art of Sound Design and Music. Glenn Kiser, director, Dolby Institute, will moderate the discussion on sound and music design, and will present clips from the film. García, composers Danny Bensi and Saunder Jurriaans, and sound designers and mixers Justin Davey and Zach Seivers will participate as panelists. Accredited Sundance Film Festival industry guests are welcome to attend.