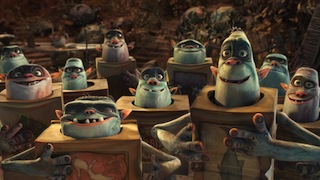 Laika, the visionary animation studio behind the Golden Globe and Annie Award-nominated The Boxtrolls and the BAFTA and Academy Award-nominated Coraline and ParaNorman, will open its archives for the first time for a limited auction of more than 250 puppets, models, props and art in The Art of Laika, to be held by Heritage Auctions on February 12 in Beverly Hills.

A portion of the proceeds of the auction will be donated to The Art of Elysium, a non-profit arts organization that works to make art a catalyst for social change by bringing creativity and inspiration to children, artists, and various populations in need.

“Laika is known for its artistry and revolutionary stop-motion animation techniques,” says Jim Lentz, Heritage Auctions’ director of animation art. “The studio’s legions of die-hard fans regularly ask Laika for the opportunity to own some of the masterfully engineered puppets, props and other artwork used to make these beloved films. So the studio is finally offering a specially curated collection of items from its production archives. This is the chance that those fans, and animation and film collectors of all stripes, have been waiting for.”

“Laika’s films aim to promote thought, feeling, and connectivity through art, inspired by our shared humanity,” says Travis Knight, president & CEO of the studio and an Annie-Award-winning animator and producer. “We’re deeply gratified that the spirit of our work has resonated so strongly with audiences around the world. Laika’s artists and craftspeople are consummate creators, and each piece of this collection is a testament to their talents and imagination. These are beautiful, unique, and handcrafted works of art of the highest order. We’re so pleased to open up our vaults for animation fans around the world and to support The Art of Elysium, whose mission is so close to our hearts.”

Selected highlights from The Art of Laika will be on display at Heritage Auctions locations in several cities including Dallas, January 27-29, New York, February 3-5 and Beverly Hills, February 9-12.

Some of the items in the auction include, but are not limited to: 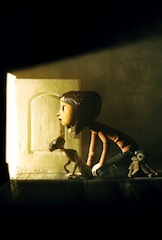 Other Mother production puppet in her elaborately realized black dress

Eggs and Boxtrolls production puppets complete with their Box outfits

Snatcher’s Mecha-Drill, at over five feet, the largest prop ever created for a stop motion film