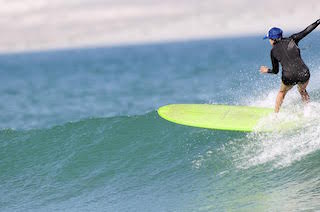 While non-traditional gender roles are becoming more widely accepted, stereotypes still have a tendency to get in the way. This is particularly true for a Latina woman who is a teacher by trade, but wanted to blaze her own trail as the first female surfer in a tiny rural fishing village. Filmed on location in Baja, Mexico, La Maestra is a unique surfing movie told in the words of teacher/surfer, Mayra Agulair, which brings to light the issues facing female surfers, as well as the importance of taking care of the environment that we use for recreation and sports.

Inspiration to tell the story of La Maestra came about when San Francisco High School media teacher Paul Ferraris, received a grant that required him to find a mentor and learn a new skill that he could then pass along to his students. Having always wanted to learn how to make a PBS-style documentary, he called upon filmmaker Elizabeth Pepin Silva who shared the story of Mayra Agulair. Both agreed she would be a perfect fit for a documentary film. “Mayra really inspired us,” said Silva  “We really admired the fact that she decided to pursue paths that are very unusual for women in the area of the world in which she lives. It has not been easy for her, but she has succeeded and has become an inspiration to her community and in changing the way others look at roles for women.”

Typically, FCP X sets the timeline frame rate based on the first clip used in the project, but with La Maestra, the first clip didn’t match the majority of the footage. The resulting mixed frame rates in the timeline required that Stack re-conform from 23.98 to 29.97 to get rid of any stuttering playback and ensure smooth surfing action. The re-conform was done in FCP 7 to take advantage of the traditional two-window professional source/record viewing setup, so that the reference movie could be seen side by side with the revised timeline and maintain sync with audio. Exporting audio for the mix session was a particular stumbling block, since FCP X does not natively support OMF export and third party conversion tools failed to accurately translate the audio. To remedy the problem, audio was exported with assigned “roles” that were set-up in FCP X. Audio tracks were separated by categories, (dialog, sfx, music) and then sent to ProTools. 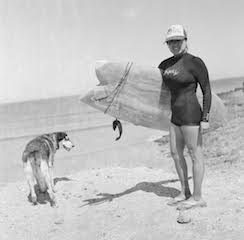 Once conforming was complete, color grading was accomplished using DaVinci Resolve. “I’m very happy with the final delivery of the film. It was worth the extra time involved to move the project out of FCP X. It’s difficult to recommend that platform for professional editors who plan to share finishing with outside colorists and sound mixers, since it so often ends up costing considerably more time and money,” said Stack.  “Creatively La Maestra was a real joy to work on. I like being involved in projects that not only tell interesting stories, but also have the potential to raise awareness of conservation efforts and get people involved.”

“The film looks and sounds amazing,” said Silva. We plan to use Alpha Dogs again for our next film that begins production late summer of 2015.  This time we are taking advantage of their complimentary pre-production meeting services. We really appreciate that AlphaDogs offers a consultation with an online editor prior to shooting, so that everyone is on the same page before the cameras are turned on.  It saves a lot of time and money later during post-production.”

Ferraris and Silva hope audiences will be as inspired as they were by Mayra’s story and realize there is a lot more to Mexico than the negative headlines often seen on television. Silva comments, “If we were to rely on media and stereotypes, we would be left to think Mexico is a lawless place run by drug cartels. We want La Maestra to give viewers a glimpse into the life of an ordinary woman, doing extraordinary things, who is really no different than women in other parts of the world. It’s only when people begin to see similarities amongst others, that we can begin to humanize places that are so misrepresented by the media.”

La Maestra will premiere in the United States this October.  For more information visit: http://otwfront.com/la-maestra