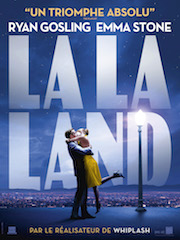 “It is a fantastic step forward for our teams. La La Land is the first film from a Hollywood studio to be distributed and screened in EclairColor,” said Jean Mizrahi, co-founder and chief executive officer of Ymagis Group. “I would like to thank Lionsgate and SND – M6 Group, the film’s French distributor, for their confidence in our innovative technology. EclairColor offers cinemas the opportunity to significantly improve projection quality at an affordable cost and at the same time benefit from flexible planning, as EclairColor projectors can be used to play content in standard format and in EclairColor.”

With three films released in EclairColor since the start of the year – Primaire (StudioCanal), Mes Trésors (SND – M6 Group) and Dalida (Pathé) – Ymagis Group also unveiled nine other feature titles soon to be available in EclairColor:

Brimstone by Martin Koolhoven (The Jokers)

Message from the King by Fabrice Du Welz (The Jokers)