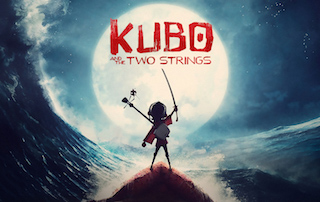 Laika’s acclaimed animated film Kubo and the Two Strings is being released in China today by Infotainment China Media, a leading movie acquisition company. This is the first time a Laika film will be presented to the massive Chinese audience and marks a remarkable achievement in the evolution of the 10-year-old Portland-Oregon based animation studio.

“It’s been a long-held aspiration to bring Laika films to China,” said Laika CEO and president Travis Knight.  “Kubo and the Two Strings is our studio’s most ambitious and personal film, a wholehearted labor of love combining a grand, sweeping story with poignant intimacy.  Brought to life using Laika’s groundbreaking production process, blending world-class artistry and craftsmanship with cutting-edge technology, Kubo is a cinematic experience unlike any other.  I am enormously proud of this film.  We’re very honored and excited to partner with Infotainment to introduce ourselves to the Chinese audience.”

“We always want to bring something truly special to our audience,” said an Infotainment China Media spokeswoman. “The artistry, technical achievement, superb storytelling, unforgettable characters and the expansive scope of Kubo and the Two Strings represent the zenith of modern animated filmmaking.  We are so pleased to present it to Chinese audiences.  I’m confident that it will find an enthusiastic reception.”

It has been named 2016’s Best Animated Film by the National Board of Review and AARP Movies for Grown-Ups Award for Best Movie for Grown-Ups Who Refuse to Grow Up and was nominated for a Golden Globe and BAFTA Award.