Those who serve our country do so by choice and with courage and honor. When wounded servicemen and women are forced to return home long before they are ready, many end up feeling like they no longer serve a purpose and struggle with day-to-day living. When Marine Corporal Kionte Storey lost his leg and suffered other injuries during his second tour of duty in Afghanistan, he made a conscious choice upon his return home that he would not only overcome his injuries, but also help and inspire other soldiers to overcome theirs as well.

Cirina Catania, director/cinematographer and founder of The Catania Group met wounded hero Kionte Storey when she was volunteering to shoot video and stills for an Orange Country based charity that provides furniture for wounded veterans.

“When I learned more about this amazing young man, I just had to do a story about his life,” said Catania.  Currently in production on the documentary film Kionte Story-Athlete, Catania recently produced a 2-minute clip that was shown to other filmmakers at the Slamdance Film Festival during a presentation for Blackmagic Design. 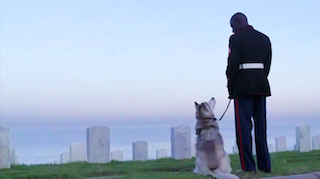 Since it was one of the first looks of the film, Catania needed to tell the story well with color grading literally and subliminally matching the emotional wealth of the story. She called upon the expertise of AlphaDogs colorist, Sean Stack who is proficient in DaVinci Resolve.  Stack’s creative eye coupled with the tools available through Resolve, allowed for three very distinct looks to be created in the short 2-minute clip, thus adding to the emotional impact of each scene.

“One of the reasons I love the Blackmagic line of cameras is the ability to shoot Raw or at ProRes in film mode and paint each scene using Resolve in post,” said Catania. “I believe Sean and I accomplished something pretty remarkable and audiences will react positively to the clip. This is important, as we are working on building awareness for the project as we continue to move forward. AlphaDogs has a reputation for their commitment to independent film and it’s nice work with a facility and team that appreciates what you do, and helps make the product even better. They did a great job bringing the footage to life.”

Catania hopes audiences will be motivated by what they see on the screen. While Storey has suffered greatly with the loss of his leg, he hasn’t let that stop him from moving forward in life and becoming a better person. Storey explains, “It’s a new start, whatever injury you have, whatever you are dealing with, you have to make that work for you, instead of against you. Just because your leg hurts does not mean you can’t play a sport or be active.”

Storey is passionate about running track and says that without it, his life would be boring and meaningless.  He enjoys competitions and trains daily. He hopes to gain a spot on the International Paralympic Team and travel the world helping others overcome their challenges.