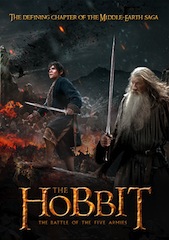 Earlier this month, the Kinepolis group screened The Hobbit – Battle of the Five Armies on its Barco DP4K-60L laser projector. The première took place December 9 at the Kinepolis flagship cinemas in Lomme, France. The next day Kinepolis Brussels (Belgium) screened its first laser-projected movies and the new technology will go live at Kinepolis Madrid tonight. This marks the European debut of the new laser projector.

“The laser experience is truly amazing; there’s nothing like this on the market,” says Eddy Duquenne, CEO of Kinepolis Group. “We are confident that our investment in the laser-illuminated projectors will really help us bring the movie experience to new levels and offer our customers exceptional cinema moments. Barco is the perfect partner, as the company really leads the market with its vision of an immersive, interactive cinema experience. Just like Kinepolis, they are on a constant quest to introduce new, exciting technologies that help bring back the magic of the movies.”

“Barco is just as excited as Kinepolis is,” adds Wim Buyens, Barco’s head of entertainment. “With the introduction of laser, we are setting a new standard for image quality in the cinema industry. This is another great milestone in our history as cinema innovator and we’re delighted to share this première with Kinepolis Group.”

Launched at CinemaCon in March this year, Barco says the DP4K-60L laser projector is the most compact, fully integrated 6P solution for cinema. It is the first of its kind capable of showing 4K content at 60 fps and 3D movies in full 4K-resolution. Because the projectors offer brightness levels more than double that of lamps, they ensure much brighter, more consistent images with vibrant colors and better contrast, thus improving the level of immersion. Moreover, the operational cost of laser projectors is lower as no lamp replacements are needed and laser light sources have a longer life span, while also consuming up to 40% less energy than traditional xenon lamps.

The Kinepolis group has been committed to providing Europe’s cinemagoers with a unique movie experience ever since its foundation. Barco has been its trusted technology provider along the way. In March this year, Barco and Kinepolis Group closed a strategic partnership to equip Kinepolis cinemas with a premium technology package from Barco.