KBS Follows Food around the World 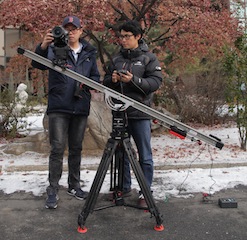 Matthews Studio Equipment’s Floatcam DC-Slider recently got one of their most important clients, Seoul, Korea based Green Trading through a challenging shoot for KBS Global Project: Food Odyssey 2014.

The documentary is about Food, traveling all over the world to reveal the unlimited human creativity and the secret of civilization contained in food. KBS’s team covered more than 20 countries, shooting in the hottest places on Earth from the Ethiopian Danakil to the North Pole.

“The film’s director needed a package that would set up, move quickly, and stand up to the conditions they would encounter, whether hot or cold locations, inside in cold storage or other buildings and more,” explains Green Trading’s Jaseu Jeong. “And, it needed to be fit the limits and restrictions of foreign countries.”

That meant Floatcam’s DC-Slider – one device for multiple uses. Something that Green Trading learned would fit the needs of their clients. “At a glance, DC-Slider looks like just a simple travel slider, Jeong says. “Even the counter balance system. We thought it couldn’t be a different unit in comparison to other equipment at first. When we learned that it could make five different types of setups with one compact device, we knew it would be exactly what clients like KBS Television need.”

A simple location where people were holding food could be a challenge for the documentary team. “At times they encountered desert and rough ground, often,” Jeong explains. “Once the balance of the DC-Slider was set up, with the tripod on the ground and it’s mini-jib function in use – it easily handled the location. It went with them everywhere – from very small places inside of a Pyramid to food storage lockers and more.

Green Trading, based in Seoul, Korea, supplies support equipment for everything from Feature Films, TV Broadcast and Location Dramas as well as commercials and documentaries throughout Asia and neighbors. They are the sole distributor of the Floatcam DC-Slider, which has become one of the most popular items in their arsenal since their popular workshop, for several dozen of the company’s most important clients. They also carry other MSE equipment, including MAX Minivator II, as well as MSE clamps, apple boxes, scrims and accessories.