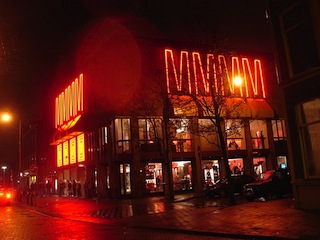 “For our new Hilversum Media Park multiplex, we really wanted to push the envelope on the experience we offer our audiences,” says Albert Jan Vos, managing director at JT Bioscopen. “As an early adopter we’ve always favored Barco’s cutting-edge digital cinema technology, and we are overwhelmed with pride to be pioneering state-of-the-art laser-illuminated projection in The Netherlands – a true revolution in the industry and a key differentiator for the cinema experience.”

Using Barco Alchemy technology, Barco says its laser-illuminated projector is not only the most compact 60,000-lumen projector available, it is also the first cinema projector that is capable of showing 4K content at 60 fps and 3D movies in full 4K resolution.

“When I first saw a demo of the Barco laser-illuminated projector, I was extremely impressed by the razor-sharp images and brightness levels it displayed,” says Gerrit Doorn, manager buildings and projects at JT Bioscopen. “Thanks to this groundbreaking technology, we will captivate audiences with unparalleled image quality, outstanding 3D brightness and superior color performance – for the best viewing experience currently available.”

“With dozens of confirmed installations around the world this year, Barco is leading the way in commercial laser-illuminated projection technology and we are honored that JT Bioscopen selected Barco again,” says Todd Hoddick, vice president gobal entertainment at Barco. “Our top-notch laser projection is just one of the many technologies we are providing exhibitors to turn their cinema into a true entertainment destination, to drive crowds to the cinema.”

In 2011, dcinex helped them convert to digital, deploying Barco digital cinema projectors across their entire circuit. The Barco partner did the installation this time as well. “As a long-term partner of JT Bioscopen, we are delighted they selected dcinex once again to gear their flagship Hilversum Media Park multiplex with the latest digital cinema technology,” says Matthew Jones, managing director of dcinex Benelux. “We are excited about the recent evolutions in cinema technology and especially about Barco’s laser-illuminated projection. We believe the new JT Bioscopen multiplex sets a great example for what theaters can provide in the future.”