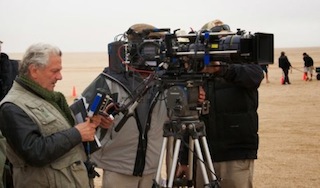 Facing inhospitable conditions, intense action scenes and the need to accommodate a massive number of visual effects, Seale and his crew chose to shoot principal photography with Arri Alexa cameras and capture on Codex Onboard recorders, a workflow that has become popular among filmmakers for its ruggedness, reliability and easy integration with post-production.

Originally, Fury Road was to have been shot near Broken Hill in New South Wales, Australia. However, several years of unusually heavy rainfall caused the desert in the area to bloom with wildflowers making it unsuitable for the film’s wasteland setting, and production was moved to Namibia. The coastal deserts of that African country are among the most formidable in the world, featuring sand dunes measuring 1000 feet high and 20 miles long.  Frequent sandstorms and intense heat required special precautions by the camera crew.

“I’d shot plenty of film-negative films in deserts and jungles under severe conditions, but never digital,” said Seale. “So I was a bit worried, but I had a fantastic crew of people who had done that…had worked with digital cameras in jungles, deserts, dry, heat, wet, moist, whatever.  They were ready and put together full precaution kits of rain covers, dust covers and even heat covers to take the heat off the cameras in the middle of the day.” 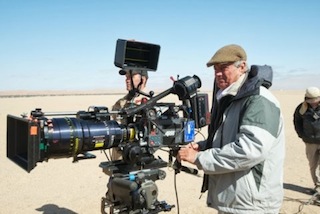 “We were using a lot of new gear.” Seale said. “Everything that our crew did in pre-production in Sydney and took to Namibia worked very, very well for the entire time.  Our time loss through equipment was minimal.”

Seale’s crew was outfitted with six Arri Alexas and a number of Canon 5Ds, with the latter used in part as crash cams in action sequences. The Alexas were supported by 11 Codex Onboard recorders. The relatively large number of cameras and recorders helped the camera crew to remain nimble. While one scene was being shot, the next was being prepped. “We kept two kick cameras built the whole time, and two ultra-high vehicles rigged the whole time,” said camera coordinator Michelle Pizanis. “When we when drove up (to a location) we could start shooting, rather than break down the camera at one site and rebuild it at the next.”

The original Mad Max is remembered for its gritty look. Fury Road took a different route due to the film’s heavy use of visual effects. “The DI and the post work is so explicit; almost every shot is going to be manipulated in some way,” Seale said. “Our edict was ‘just shoot it.’ Continuity of light wasn’t really a question. We knew that the film would be cut very quickly, so there wouldn’t be time to analyze every shot. Intercutting between overcast and full sun wasn’t going to be a problem. On this film, the end result controlled the execution.”

In order to provide maximum image quality and flexibility for post-production manipulation, Seale and his crew chose to operate the Alexa cameras in ArriRaw mode. That, the cinematographer noted, made Codex an obvious choice, as only Codex recorders were capable of reliably capturing ArriRaw. 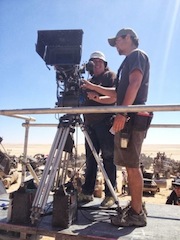 “The choice to go with Codex was definite for the quality of the recording and post-production considerations,” Seale said. “Everyone said Codex was the recording device that we had to have. Once again, we were a little worried about desert heat and desert cold. It changes so much from night to day. And during the day, we had dust storms, dust flying everywhere. We sometimes had moisture in the air. But the Codex systems didn’t fail us. They came straight through with flying colors and, in post, they are very happy with the results.”

Shooting digitally with Codex offered an advantage over shooting on film as it avoided the need to reload cameras with film negative in the blowing winds of the desert. “There is a certain amount of paraphernalia needed to shoot digitally,” Seale said, “but our crew was used to that. They built special boxes to put everything in. They had little fans. They had inlet and outlet areas to keep air circulation going. Those boxes were complete. Cables came out and went to the camera. If we were on the move, the boxes were bolted down so that they were out of the way and didn’t fall off. Sometimes we sat on them to get our shot.”

RF interfaces were used with the Alexa cameras to transmit images to a command vehicle for monitoring by director George Miller. Miller was not only able to review shots, he could edit material to determine what further coverage was needed.  “For George, it was a godsend,” said Seale.  “That refined the film shooting and made it a lot quicker than the normal procedures.”

It was that sort of flexibility that made shooting with Alexa and Codex so appealing, added Seale. “I was a great advocate of digital ten or 15 years ago when it started to come in,” he said. “Film negative is a beautiful image recording process, but it’s 120 years old and you get scratches and dead flies caught in the reels.  It’s pretty archaic. I think the way digital has caught on is extraordinary. Its R&D is vertical, where film development has stopped. The ability of digital to record images coupled with the DI, where you can change it, manipulate it, allows you do anything you like. I know with Mad Max, it won’t look anything like a ‘good film image’ and it won’t look anything like a ‘good digital image’…it will look like its own image. I think that’s the wonder of it.”